The allure of gold...

Gold's history dates back to at least 3100 BC and has probably been traded before then. Over the years Gold has continually increased in value. More recently, since the financial crisis of 2008, the price of Gold has rapidly increased.

This huge increase over the period made it one of the of the most profitable markets over the last decade. In a decade of uncertainty Gold was bid as a reliable safe haven. As paper currencies were viewed with suspicion the lure of Gold and it's proven long term value proved alluring to many.

It has served as a refuge for investors fearful of putting their money into less reliable markets. In the chart below you can see that the price of Gold increased from around $967 an ounce to $1900 an ounce at its peak in 2011. 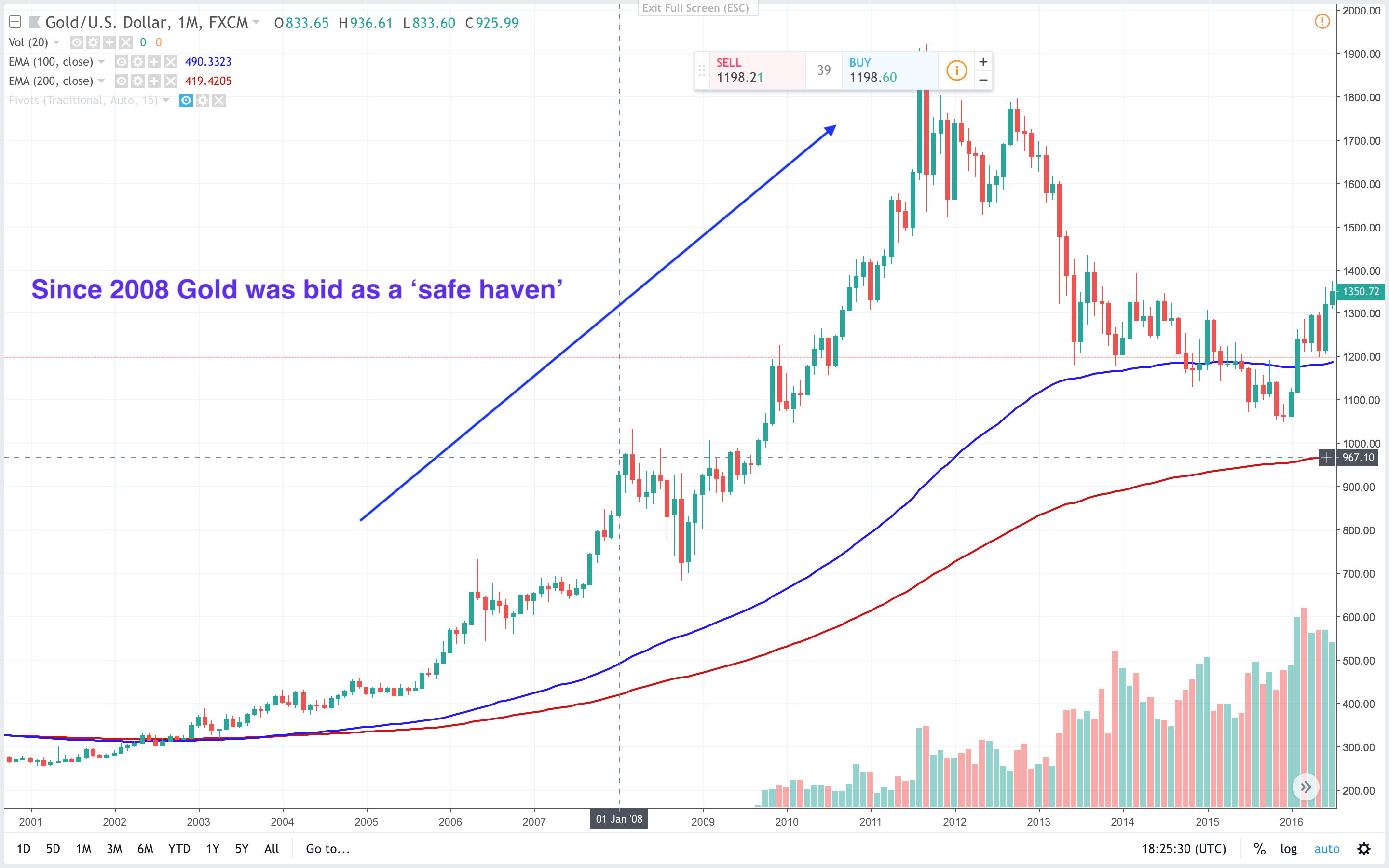 However, despite the continued uncertainty we have seen lately with the US China trade war, the weakening of Turkey's Lira, the convoluted way NAFTA has been handled the price of Gold has been rather muted. In the chart below you can see the steady fall in Gold prices since June 2018. 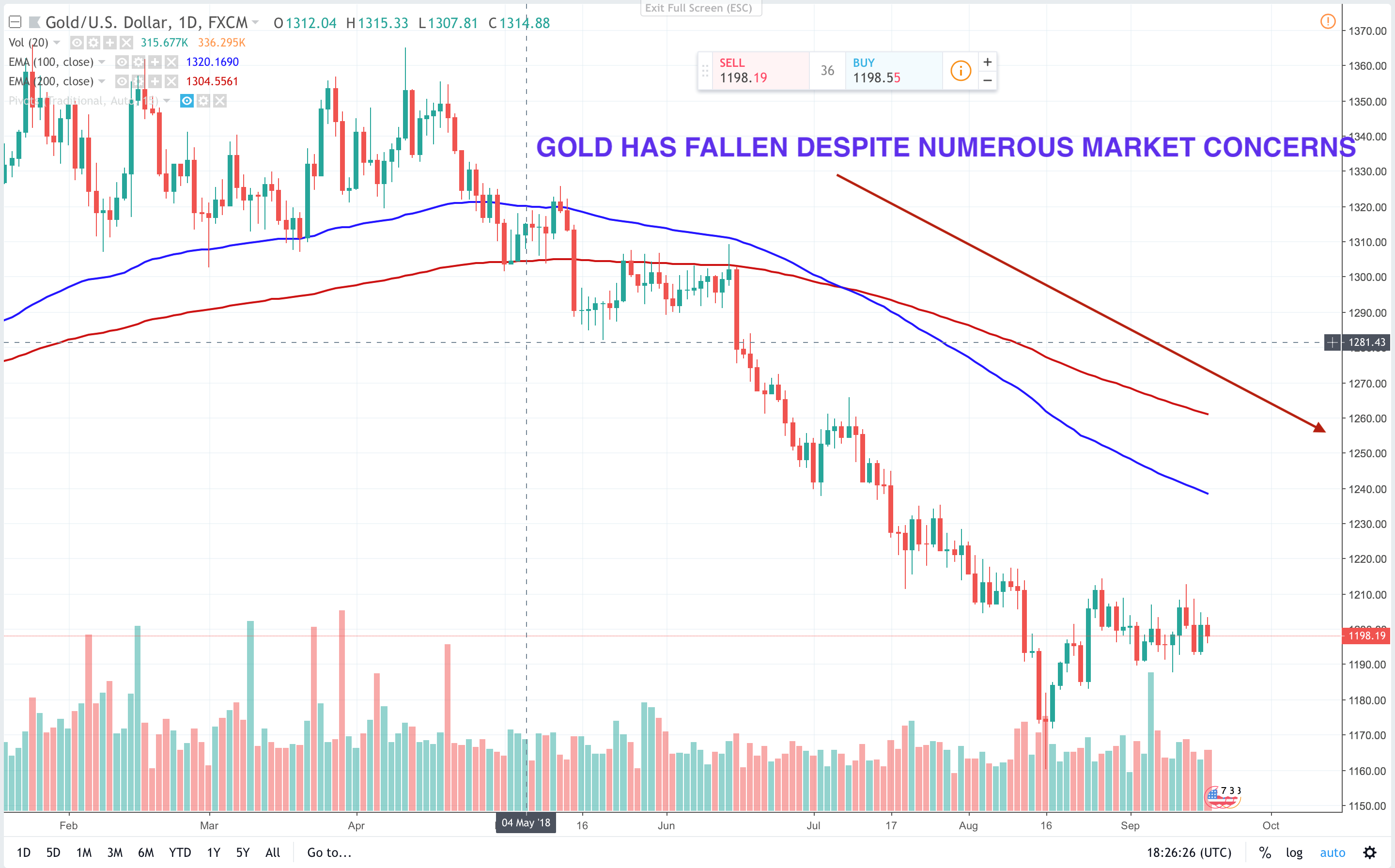 Over this last year much of Gold's weakness is being attributed to US dollar strength. The strengthening US economy and the Federal Reserve's anticipated two rate hikes has led to the US dollar being viewed as a preferred safe haven to Gold.

In all of the US and China trade war talks it is thought that a strong US economy would be well placed to weather any storm. However, the strong US dollar has been compounded by other central banks like the European Central Bank, the Bank of England, and Japan being slower to increase their interest rates.

The strengthening US dollar against the Lira and the Yuan have only compounded the problem. So, the higher the US interest rates the less appealing Gold is since it has no yield value. It is also worth watching Mid-Term elections coming up in November and if the Democrats gain control of the House of Representatives the US dollar would likely lose ground against Gold on the lack of certainty going forwards.

The world has been in a period of ultra-low interest rates since the financial crisis of 2008. The Swiss National Bank, for example, is still in a period of negative interest rates. During these times Gold has more attraction since if bonds and saving accounts only offer poor returns, why not place your money in the relative security of Gold.

However, as interest rates increase across the world Gold will likely continue to depreciate as investors place their money elsewhere. Gold has particular interest in a low interest and high crisis environment. As the crisis recedes and interest rates rise then Gold's price recedes. It is a cyclical market going through 'waves' of interest.

Tip #3 Think long term, Gold has been in a strong uptrend since 1971

Looking at the chart below you can see that Gold has appreciated considerably since 1971. If you had bought and held since 1971 you would be sitting in a very nice profit now. In this context the current prices might represent a good time to put in some long-term longs.

An example where we might see Gold being bid would be in the situation of the dollar being sold off. So, by using the outlook for the dollar it may be a good indication of where to add some medium/longer term longs. 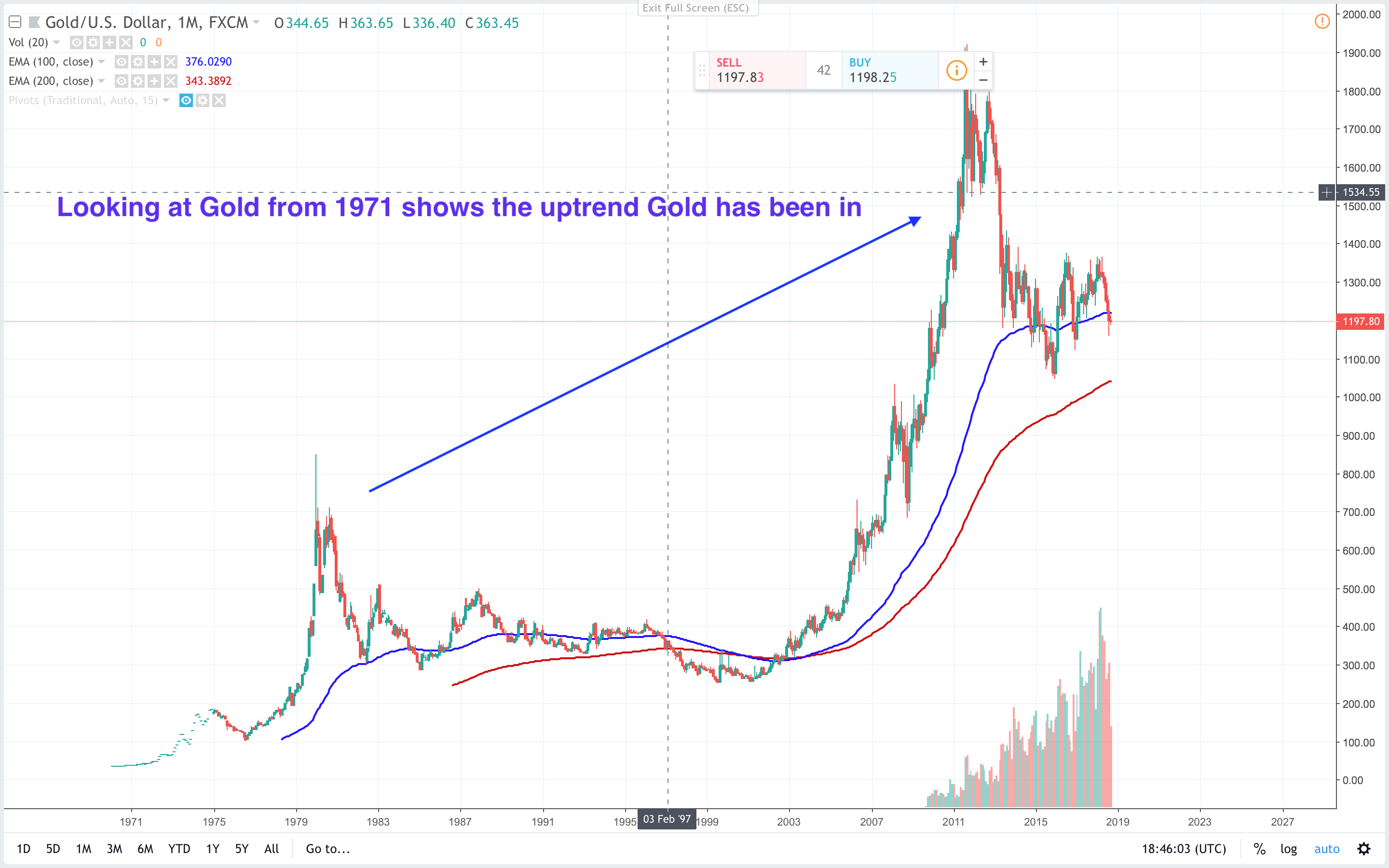 Tip #4 use moving averages to define and limit your risk

Timing of entries can be very difficult and the use of the key moving averages like the 100 and 200MA can provide key places to both enter and define your risk against. In the monthly chart above the 100 and 200 MA is plotted on the Monthly chart.

In recent months price has tested the 100 MA and tried to find support against it. If a strong US dollar environment continues then the 200 MA is below, just above the key 1000.00 level.

This will provide a key pivot point for Gold moving forward and should provide a medium-term line in the sand for the direction of Gold. Stay above is bullish and move below is bearish

Of course, not everyone will want to hold their Gold positions for months and years. If you did, you may be best placed to average in by buying in small increments across a larger timescale. The benefit of this is that your price is 'averaged' out across a range of different values.

However, for trading Gold on an intraday basis the inverse correlation between falling interest rates and increasing Gold prices should not be your focus. Instead look at the use of key technical tools such as moving averages, pivot points and candle stick patterns as well as the market sentiment for that day in the market.

This article was submitted by UFX.com