An overview of the pound and its future outlook 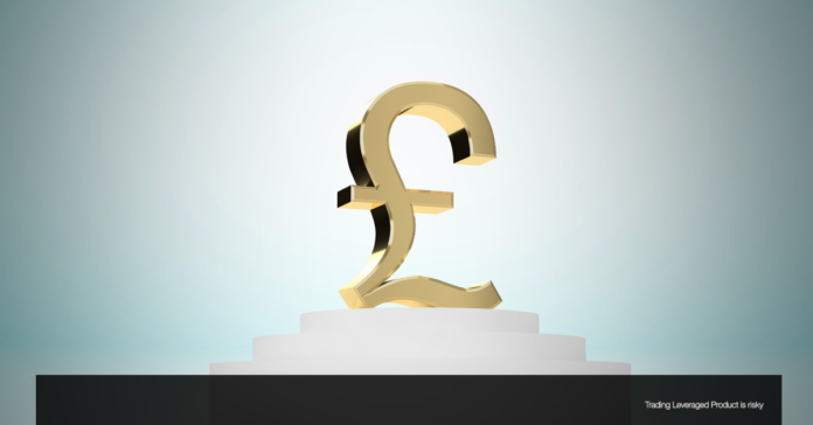 As the US Dollar resumed its now 4-week down trend, earlier posting a 2-month low at 90.42 by the measure of the USDIndex, Sterling has posted a 9-day high versus the US Dollar while hitting respective 2- and 9-day highs against the Euro and Yen.

Speculation that the Fed might have at least hinted at a tapering, which hadn't been our view, was thwarted, and longer-dated Treasury yields and the US Dollar duly took a turn lower. The 10-year T-note yield was pressed back under 1.62% after yesterday foraying above 1.65% ahead of the Fed's announcement. The limited magnitude of movement shows that most market participants viewed the FOMC as being uneventful, and the Fed's description of inflation pressures as likely being "transitory" as unsurprising.

Sterling, which has developed a pandemic-era proclivity to correlate positively with risk appetite in global markets, has lifted concurrently with a burst in risk appetite in global markets today. Over the last month the currency has  underperformed the currencies we track (the G10 units plus several others), aside from the case against the US Dollar, but still registers as an outperformer on the year-to-date, with only the oil-correlating Canadian Dollar and Norwegian krone having risen by a greater extent than the UK currency.

Overall the bullish outlook on the Pound against the Euro has been retained, and more especially the low-yielding currencies of surplus economies, such as Japan and Switzerland, which is hinged on the expectation that the global pandemic recovery trade will continue into 2022. The rootedness of JGB yields makes GBPJPY, USDJPY and even EURJPY attractive targets for speculators to play shifting yield differentials. Rate differentials are in favour of the USD, GBP and EUR if we compare it with Japanese yields hence this is a key factor that could likely keep JPY under pressure against these majors.

Meanwhile, the UK's main equity indices are replete with globally-focused cyclical stocks, which should benefit as major economies rebound. The broad trade-weighted value of the Pound still remains near historically weak levels, too. These factors will have to offset any erosion in UK productivity and investment that may become apparent as a consequence of Brexit.

UK local elections in early May will warrant monitoring, particularly with regard to how the pro-independence parties fare, and whether they can reach a supermajority in the Scottish parliament. This would legitimise their calls for another independence referendum, though polls have been tipping out of their favour lately. It's a close call: Politico's poll-of-polls tracker currently shows 46% in favour of remaining in the UK with 45% favouring an exit, with the remaining 9% undecided.

Nevertheless, along with elections the BoE meeting is also one of the risky events for the week ahead and May overall. The BoE officials seem increasingly optimistic on the recovery and after underperforming last year, the UK economy is likely to post above Eurozone growth in 2021. With vaccinations proceeding rapidly and the economy set to re-open fully in coming months some expect the central bank to start scaling back asset purchases soon. BoE deputy governor Broadbent told a newspaper last week that the economy will see "very rapid growth at least over the next couple of quarter". That leaves some event risk for the May BoE meeting and although we suspect that the BoE may be reluctant to move before the Fed, with markets already pricing in 15 points higher rates by the end of the year the pound could struggle at least short term, if there is no hawkish leaning signal next week. 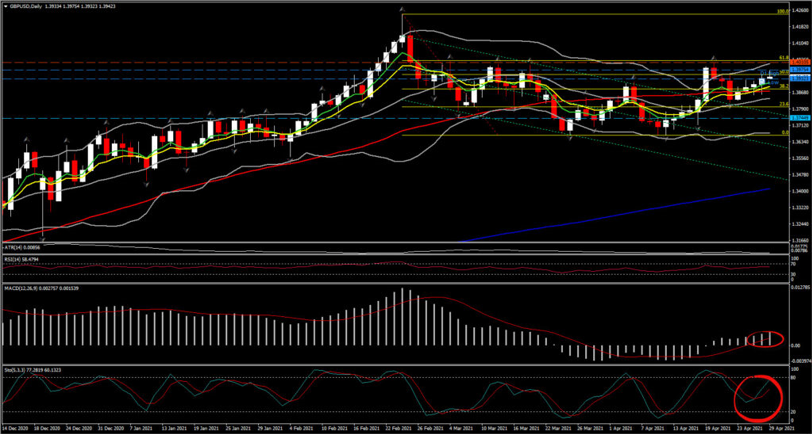 GBPUSD returned to the 1.3900 area; however the positive momentum appears to be weak so far and currently impotent to break the 1.4010 Resistance level. This is a crucial Resistance level reflecting the 4 upwards fractals and the key 61.8% Fibonacci level since February's down leg. As the asset remains above  20-, 50- and 200-day SMA the long term outlook remains positive. However only a decisive break of 1.4010 could define price direction for May. 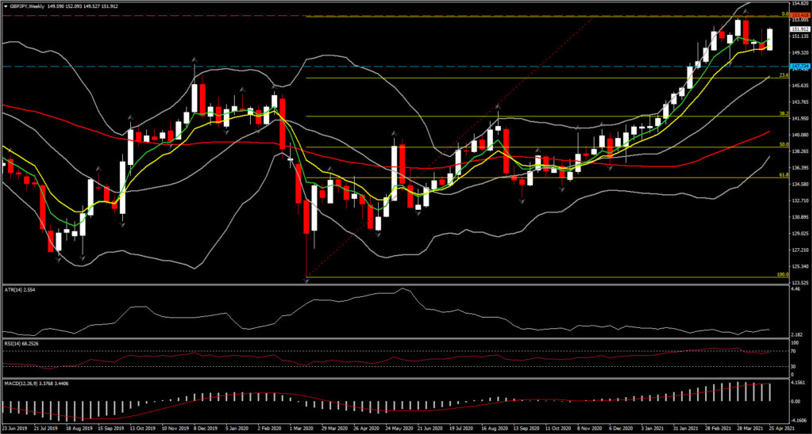 GBPJPY is sustaining a neutral to positive outlook as it held 2020-2021 gains intact, nudging  a strong floor at the 50-day SMA despite the zeroing of the positive sentiment. Currently turned above 152.00 covering more than 60% of the distance until the 2-year peak at 153.40. The fresh buying seen after the dovish FED could retest the latter as momentum indicators started rising further with daily RSI at 61. However only a confirmed break above 153.40 could suggest a continuation of the 8-month rally.

Disclaimer: This material is provided as a general marketing communication for information purposes only and does not constitute an independent investment research. Nothing in this communication contains, or should be considered as containing, an investment advice or an investment recommendation or a solicitation for the purpose of buying or selling of any financial instrument. All information provided is gathered from reputable sources and any information containing an indication of past performance is not a guarantee or reliable indicator of future performance. Users acknowledge that any investment in Leveraged Products is characterized by a certain degree of uncertainty and that any investment of this nature involves a high level of risk for which the users are solely responsible and liable. We assume no liability for any loss arising from any investment made based on the information provided in this communication. This communication must not be reproduced or further distributed without our prior written permission.
Invest in yourself. See our forex education hub.