What next for the GBP following Brexit?

A look at the pound outlook post-Brexit

Four and a half years on from the initial Brexit referendum in the UK, which saw the UK electorate voting 51% - 49% in favour leaving the EU, the exit has been completed. The Brexit transition phase expired on December 31st, meaning that the UK has now left the single-market customs union and will now deal with the EU as per the terms of the trade deal agreed in the final week of 2020. The trade deal itself was the product of a tense and laboured year of negotiations which saw several original deadlines abandoned as Boris Johnson's negotiators were forced to abandon the PM's ultimatum's in pursuit of a deal.

News of the trade deal has been met with optimism in the UK. The British Pound was seen rallying against the Dollar and the Euro as traders displayed relief at having avoided a no-deal scenario which the Bank of England warned would be "catastrophic" for the UK economy. Indeed, UK asset prices have also been higher in the wake of the deal as investors avoided the need to withdraw capital, which had been a main concern over the initial impact of a no deal exit.

Criticisms of The Deal: UK Service Sector Under Threat

However, there has been criticism of the deal which many, both in politics and in the market, feel was not properly executed and does not suitably cater for the UK economy. The major criticism is that there has been no provision made for the UK services sector. The deal primarily covers goods trading between the UK and EU and not trading of services. With the services sector accounting for roughly 80% of the UK economy, the lack of framework here is likely to be reflected negatively in business investment and hiring over the coming year. Specifically, with regards to the financial services sector, the deal sets out a placeholder agreement for now with details to be clarified at a later date.

With the EU having refused to grant "equivalence" for UK financial services firms, there has already been an exodus of capital from UK financial markets. In the first ten days of the year £1.2 trillion has already been repatriated from UK to European financial markets. Indeed, on January 4th alone, the first trading day of the New Year, the UK lost £5 billion in equities trading to European markets with many in the city warning, this volume will be lost for good. Looking ahead, this exodus of capital has the potential to unseat London's reputation as the financial heart of Europe. A negative shift in investor sentiment will likely be reflected in a weaker GBP and lower asset prices.

Additionally, other parts of the Brexit deal, such as the "level playing field`' agreement have the potential to hinder British business. Under the terms, the UK is vulnerable to the EU imposing tariffs and other barriers should UK business deviate too much from EU laws and regulations. This level of constraint poses an active threat to the UK PM's plans to turn the City of London into a "Singapore on Thames".

With the initial optimism at having avoided a no-deal Brexit likely to wane in the coming months as the reality of post-Brexit British business starts to sink in, the risks are skewed to the downside for GBP. The impact on the services sector is the biggest threat, with the exodus from financial services likely to deepen in coming months. The delays to supply chains is also a big threat given the new regulatory requirements involved in trade between the continent and the UK. A survey by the UK manufacturers organisation Make UK revealed that almost 50% of its members are concerned over customs delays which they identify as their biggest risk. A further 39% are concerned over the cost of new regulatory requirements.

Increased Risks Due To COVID

The risks around the new conditions are notably amplified given the current fragility of the UK economy as a result of the ongoing COVID pandemic. With the intensifying second wave of the virus, caused by a more contagious strain, leading to fresh nationwide lockdowns, the economy is already teetering on a knife edge. The majority of economists are now forecasting a double dip recession in the UK with the chancellor of the Exchequer, Rishi Sunak, warning this week that the economy will get worse before it gets better.

In light of the risks from both the ongoing COVID pandemic and disruptions to the economy as a result of Brexit, markets are now increasingly anticipating a fresh round of easing from the Bank of England. The BOE has recently been discussing the implementation of negative rates in the UK, even surveying regional banks on how such a move would impact them. Just this week we have seen BOE policymaker Silvana Tenreyro calling for negative rates to be used in the UK to help stimulate the economy. With this in mind, the risks are clearly dovish heading into the next BOE meeting on February 4th with GBP likely to trade lower in response to fresh measures.

GBPUSD continues to trade higher within the bullish channel which has framed the 20% recovery off the 2020 lows posted during the height of the pandemic. Price has recently broken above the 1.3516 level which has been a key resistance level over 2019 and 2020. However, the recent appreciation has been laboured, reflected in choppy price action, and accompanied by bearish divergence in momentum studies, suggesting the risks of a reversal lower. A break back below the channel low and the 1.3191 level could pave the way for a much deeper correction lower. To the topside, should the channel continue, bulls will be looking for an eventual move back up to the 1.4343 highs. 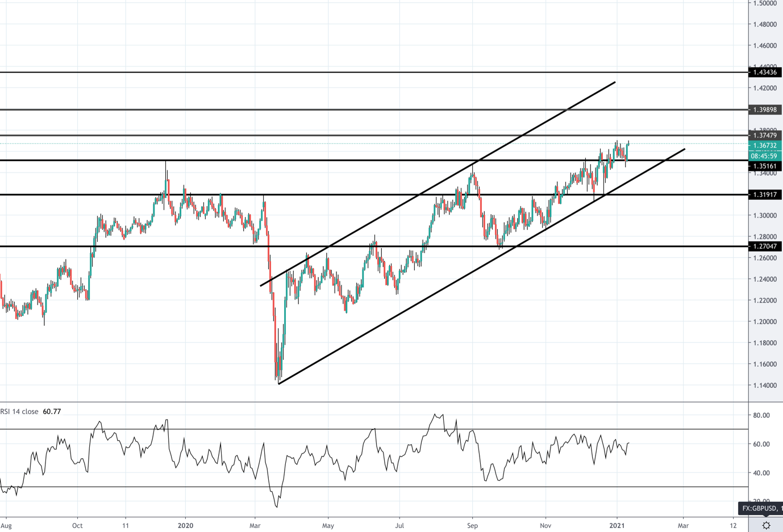 This article was submitted by Tickmill.
For bank trade ideas, check out eFX Plus