the Atlanta Fed is out with their current estimate for fourth-quarter GDP growth. They now see growth at 2.3%. That is up from 2.0% from last week.
In their own words:

The GDPNow model estimate for real GDP growth (seasonally adjusted annual rate) in the fourth quarter of 2019 is 2.3 percent on December 17, up from 2.0 percent on December 13. After this morning's new residential construction report from the U.S. Census Bureau and this morning's industrial production report from the Federal Reserve Board of Governors, increases in the nowcasts of fourth-quarter real consumer spending growth and fourth-quarter real gross private domestic investment growth were slightly offset by a decrease in the nowcast of fourth-quarter real net exports.

The next reports will be on Friday, December 20.  The most recent New York Fed GDP estimate will also be released on Friday. The Atlanta Fed and New York Fed are at loggerheads. The New York Fed sees growth at 0.7% in the 4th quarter 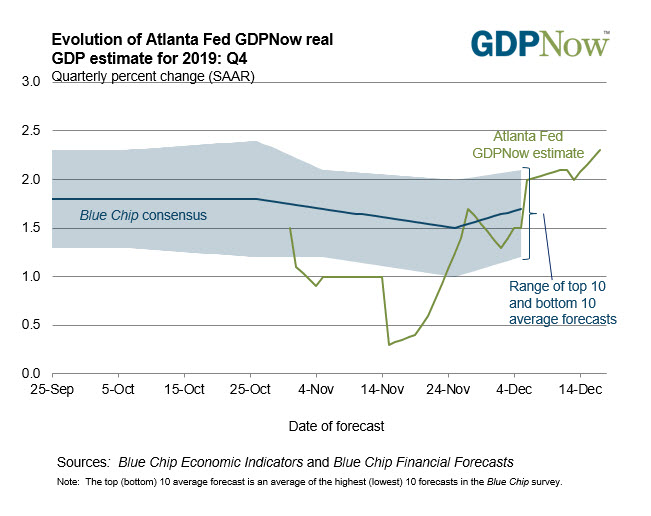