The Atlanta Fed GDP now forecast for the 3rd quarter came in at 19.6%. That is up from 11.9% on July 31.
After the 2nd quarter GDP came in at a record -32.9%, it sets up the 3rd quarter for a rebound of the "shut down" levels.  Expect the volatility to continue as the quarter progresses.  It's tough to model economic data that hasn't been is volatile before in the past.
The better than expected Manufacturing ISM report was a big catalyst for the rebound today.
In their own words

The GDPNow model estimate for real GDP growth (seasonally adjusted annual rate) in the third quarter of 2020 is 19.6 percent on August 3, up from 11.9 percent on July 31. After this morning's Manufacturing ISM Report On Business from the Institute for Supply Management and the construction spending report from the U.S. Census Bureau, the nowcasts of third-quarter real personal consumption expenditures growth and third-quarter real gross private domestic investment growth increased from 14.4 percent and -1.7 percent, respectively, to 22.4 percent and 11.1 percent, respectively. Also, the nowcast of third-quarter real government spending growth increased from 5.7 percent to 6.8 percent.

The next GDPNow update is Wednesday, August 5. Please see the "Release Dates" tab below for a list of upcoming releases. 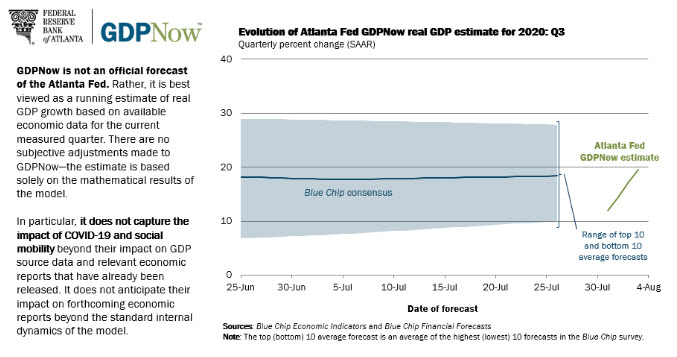