The Atlanta Fed GDPNow GDP tracker for the Q2 fell to 1.1% from 1.6% on May 9th.  The weaker retail sales released earlier today, was the catalyst for the sharp fall.
In their own words:

The GDPNow model estimate for real GDP growth (seasonally adjusted annual rate) in the second quarter of 2019 is 1.1 percent on May 15, down from 1.6 percent on May 9. After this morning's retail sales and inventories releases from the U.S. Census Bureau and this morning's industrial production report from the Federal Reserve Board of Governors, the nowcasts of second-quarter real consumer spending growth and second-quarter real gross private domestic investment growth decreased from 3.2 percent and -3.7 percent, respectively, to 3.0 percent and -5.7 percent, respectively.

The next estimate will be released tomorrow. 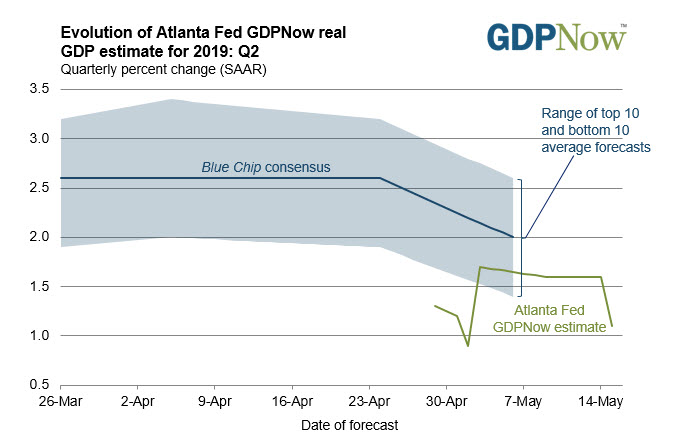