FOMC preview: 4 reasons to buy the US dollar on the Federal Reserve decision

The US dollar is in free-fall, why it might reverse on the FOMC decision.

The Federal Reserve releases its latest interest rate decision at 2 pm ET (1800 GMT) on Wednesday, April 29. There is no press conference afterwards or any forecasts so traders will only have the text of the decision to trade.

The most-recent FOMC statement was on March 18. Here are a few highlights and how they are likely to change:

This will almost certainly be downgraded, at least to something like "economic growth moderated further"

This will be scaled back after a soft March jobs report but the Fed is still likely bullish on the trend.

March retail sales were soft but this still may not be downgraded.

Market-based numbers have improved but surveys on inflation expectations have slipped.

A main place to watch is further down in the statement, where the Fed discouraged bets on an April hike. There is no chance the Fed hikes on Wednesday and the chance of a June hikes is now extremely low and this line could be changed reflect that:

"Consistent with its previous statement, the Committee judges that an increase in the target range for the federal funds rate remains unlikely at the April FOMC meeting." Which takes us to...

Four reasons to buy the US dollar:

On that guidance, the Fed will remove it altogether because otherwise they may feel tied to changing it every month and then, when they ultimately remove it, their hands will feel tied to a hike. By removing that line, the Fed finally puts the market on its own to determine when rates will go up. It's long overdue but will be interpreted as a hawkish signal. 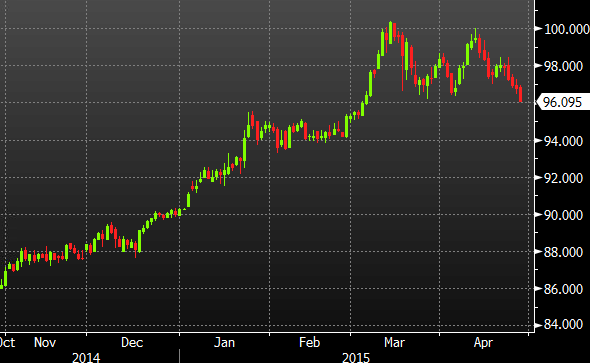 The US Dollar Index is a poor representation of the dollar but it illustrates the two-week skid.

The FOMC decision comes a few hours after the first report on Q1 GDP. The consensus is for 1% annualized growth but that sounds highly optimistic to me. The Atlanta Fed's GDP Now tracking estimate is at just 0.2%.

(Update: Indeed the Atlanta Fed nailed it. GDP rose 0.2% -- all the details here)

In any case, the GDP number doesn't matter that much, it's an early estimate and is almost always revised in a big way. What's important is that the release will signify that the market can move on from a soft first quarter and begin to focus on what's next, which is a decent US recovery -- at least better than virtually all of its FX rivals.

The trend for the dollar is higher. It's been said a million times but, the trend is you friend. It's tough to chase a rising trend so you need to look for a retracement.

The dollar is beaten down in the short-term and this is the kind of dip you need to ready to buy if you believe that the US economy is doing better.

You can argue that the Fed doesn't have much credibility (and I might be inclined to agree) but the Fed has staked all its remaining cred on an accelerating economy. That's a tough mountain to climb down from. Sure, the statement will acknowledge the recent soft spell of data but policymakers won't be convinced. The market is looking for a late-year hike but they won't get anything in the statement to strengthen that conviction.

The WSJ has a great recap of all the recent comments from Fed officials and virtually all of them are optimistic.

Lockhart is good representation of the core of the Fed. He sees a hike in the June-Sept zone.

How to trade it

I don't see the need to buy the dollar ahead of the release. The trade is either to hop in on a dollar rally after the release or let it fall a bit more.

If the Fed is dovish:

If there is a surprise in the GDP numbers and the Fed is less hawkish, then the dollar will get beaten up. It could be a final washout. The dollar has been pounded for the past two weeks but GBP/USD, for instance, is up 11 of the past 12 sessions. This would make it another day but I don't anticipate much more of a move from there.

Whatever weak hands are left will be shaken out by GDP and the longer-term USD buyers will see as an opportunity.

If the Fed is hawkish:

It signals a bottom in the dollar so get in quickly, there will still be plenty of upside if you hold dollar longs for the next few weeks. April is a bad seasonal month for the dollar but it's coming to a close and May is much better, especially against the euro, pound and commodity currencies. The euro probably still has some upside left.