In the category of "for what it's worth", the Atlanta Fed GDPNow rose to 13.2%

The GDPNow model estimate for real GDP growth (seasonally adjusted annual rate) in the second quarter of 2021 is 13.2 percent on May 3, up from 10.4 percent on April 30. After this morning's Manufacturing ISM Report On Business from the Institute for Supply Management and the construction spending report from the U.S. Census Bureau, the nowcasts of second-quarter real personal consumption expenditures growth and second-quarter real gross private domestic investment growth increased from 8.7 percent and 28.7 percent, respectively, to 12.1 percent and 32.2 percent, respectively, while the nowcast of the contribution of the change in real net exports to second-quarter real GDP growth decreased from -1.46 percentage points to -1.52 percentage points.

The next estimate will be on Tuesday, May 4. 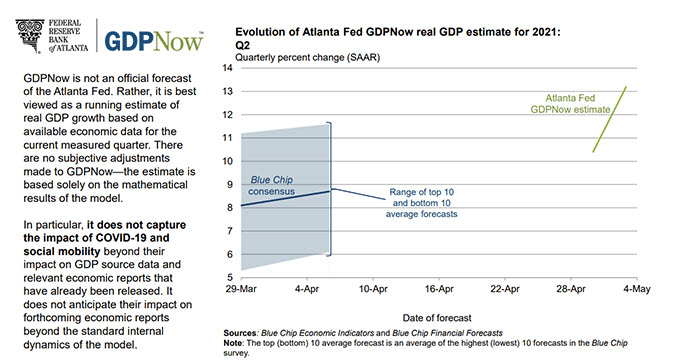 The Atlanta Fed GDP estimate for the 1Q our stated GDP growth by 1.5%.
Invest in yourself. See our forex education hub.