There's something seriously wrong in the world when you cut rates partly to sink your currency and it shoots 250 pips higher.

Eamonn had it spot on last night. The RBNZ have failed at forward guidance. He's not alone. We've been saying for the last few years that forward guidance isn't working. Back in the day a central bank would move rates when they saw fit and certainly didn't massively advertise the fact. Traders and the population were left to infer expected action from what the economy was doing. If inflation was high then you'd get ready for hikes. If the economy was wobbling, you'd get prepared for cuts. Forward guidance was minimum but everyone knew where they stood on it. It made for some hairy monetary policy decisions but that's what traders thrived on. If you were positioned for a cut and you got one, the move would be pretty big. 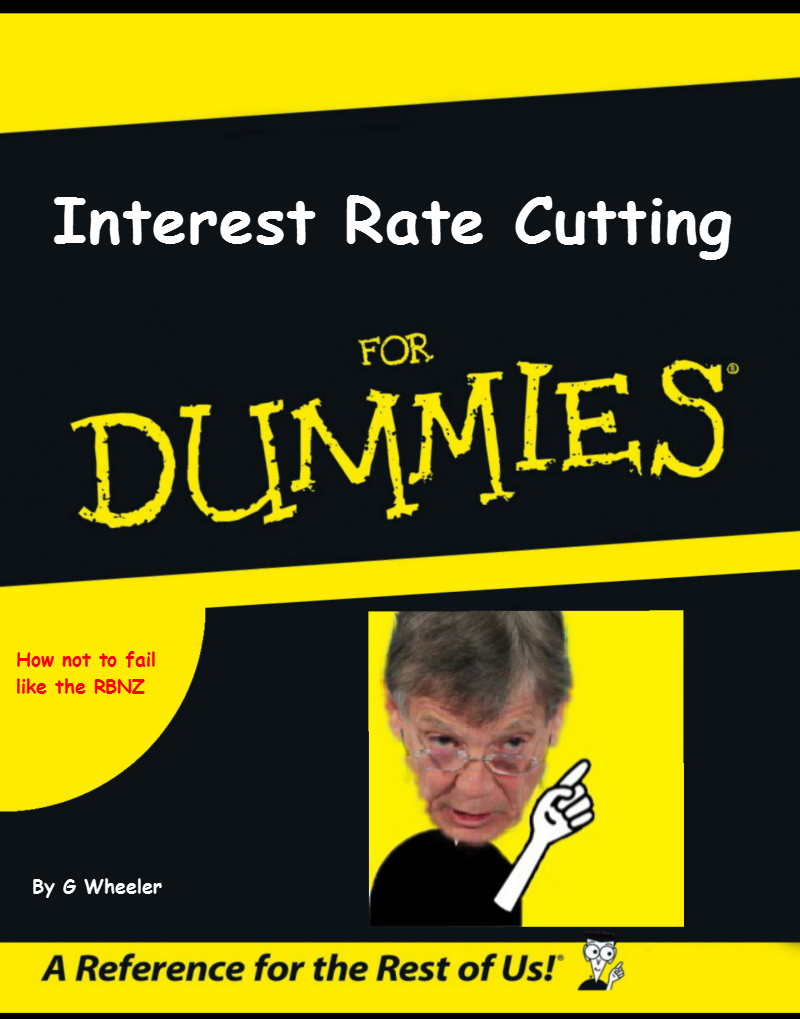 This isn't a moan up because central banks have changed the game and we can't now play it, everyone here at Forexlive, writers and readers alike, are smart enough to know when and how to adjust to these things so we can have a greater chance at profiting from these events.

Nowadays no one should be expecting a big downside move on a cut, nor big upside move on a hike, unless it comes out of the blue. Forward guidance brings the move a rate cut would bring forward so when we get the actual rate cut, we're expecting it. All that's happened is the move has shifted forward in time.

For the central bank, they may have had a reaction when they first touted forward guidance but because they may then have a period of time between the guidance and the action, that move can be undone via the everyday noise in markets. Even with the RBNZ cutting and saying they may ease again, the market isn't interested, and the currency is still no better off (for them) than it was before the decision. If they wanted the currency lower, they've failed.

According to my platform, around 28 pips was the dip on NZDUSD on the announcement. Years ago that would have been 200-300 because although we might have been expecting it, we wouldn't have really known when it would come. That cut and the message of more would have kept the pair heading lower over the weeks and months ahead, because no one would want to be on the wrong side of another cut. As far as the currency is concerned, this rate cut has been a waste of time and now they may be forced into intervention to get it lower. We know how that's worked out for them previously.

Forward guidance can work but it depends on who's doing it. Look at Draghi back in 2014 when the euro was at 1.40. Remember Trichet and his vigilance/strong vigilance clues? The difference is that the ECB and the euro is huge, and with all due respect, the RBNZ and NZD isn't. Draghi can utter a word and the market can move a thousand pips. Wheeler can utter the same word and the market can go "meh".

You can't stop change but I wish central banks would kick forward guidance out the window. They need to get shot of fan charts, dot plots,  projections and just concentrate on what they should be doing, not on what the market may think or do if they act. If they did that then monetary policy would have a greater, and most probably a more positive, effect on their economies.

So what now for the kiwi?

Right now we're almost back to where we started before the RBNZ. Is that due to their monetary policy stance? Not in the slightest. The reason we're back here is that so many people were expecting the kiwi to jump that everyone piled into longs. Now it's over everyone is getting out. As we can see from the charts, rallies are now being well sold into. 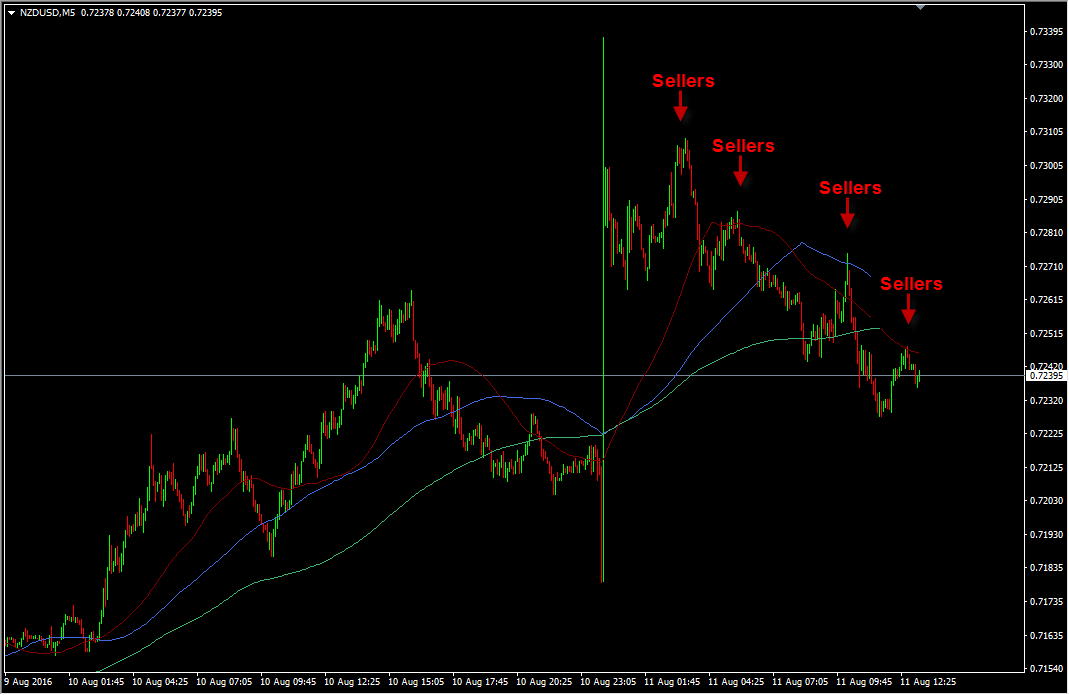 I would think, on an intraday basis, the market is probably fairly flat now, if not slightly short.  We're over the event and will get back to trading everything else. What we have to do now is almost ignore yesterday and look at the charts in almost the same way. I say almost because although they failed in one part of their actions last night, they have given a message that they will do more. That's likely to get the market taking a mild selling bias. It may not be strong but it could just make further gains a little tougher. That's likely to happen until we get to the next time they prime a cut and we do this all over again. There is still the possible threat of intervention too but again, that's likely to be another great fade trade depending on how the market is leaning at the time.

I hope you all managed to get on the jump and made good money? I was looking for a slightly deeper dip, which I didn't get. Some you hit, some you miss, that's trading. For me, going forward is a simple task. We had the charts and levels before the RBNZ and we've still got them after. Trade them as normal until the RBNZ circus show comes back to town again. 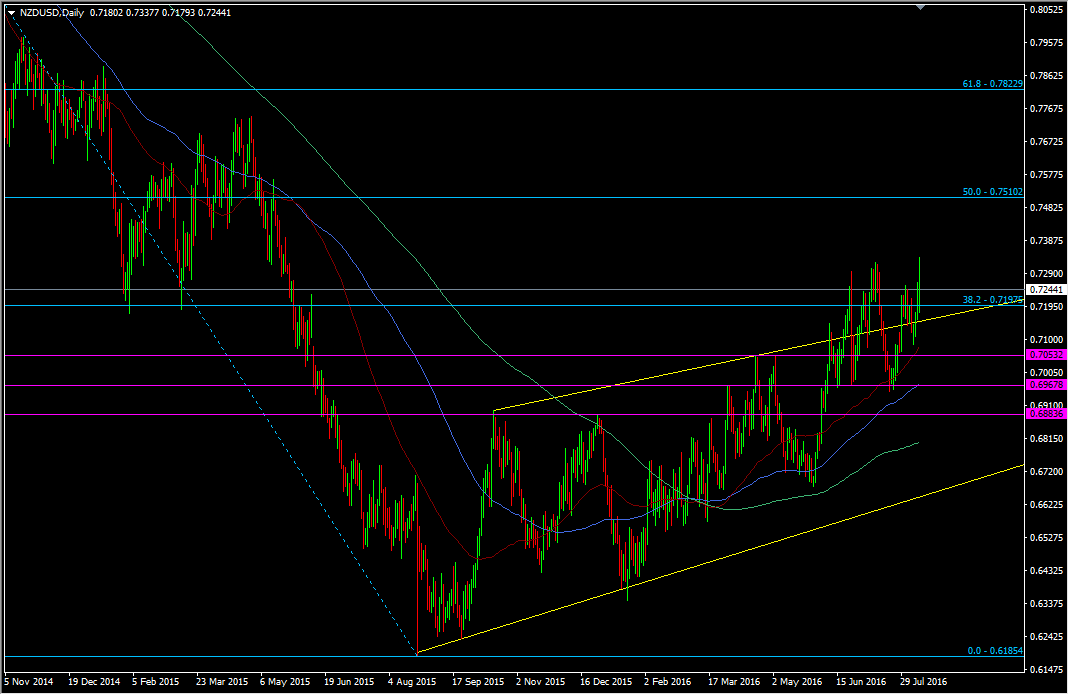