Terry McCrann is a big fan of ForexLive

Australian Herald-Sun RBA watcher Terry McCrann writes a glowing nod to yours truly and ForexLive in his column today.

IF you allowed yourself to be bothered by every little twerp on the web, who manages to draw on a knowledge pool every bit as deep as an (empty) toddler’s wading pool, to then pontificate about you, you would of course go nuts or be nuts to start.

I’m making an exception because this particular twerp was relayed by the Macrobusiness website which has (many) pretensions to serious, if not necessarily informed, commentary on affairs.

According to an “Adam Button” at “Forexlive” — I’d not previously heard of either; they’ve managed to ‘rise’ without trace; and I’m guessing young ‘master’ Adam is the sort of “expert” who’s “seen it all” since leaving school in, maybe, 2009 — I had a “nearly-unblemished record of being wrong (about RBA rate changes) in 2012”.

Well, in actual fact in 2012 I correctly foreshadowed nine of the 11 rate decisions for that year. Maybe I was wrong — that is to say, about young “master” Adam. Maybe he hadn’t yet left school even in 2012. Dare I suggest that young twerps like him could be so lucky to be half as right as me.

Incidentally, those 9-out-of 11 hits included being the only commentator to tip a 50 point cut in May of that year instead of the usual 25 points. And I quote from my column of April 25 — a full week before that meeting:

“TWO things are now absolutely beyond doubt. There will be an official interest rate cut next Tuesday, and the official rate will be cut by at least 50 points over the next five weeks.

Somewhat less certain, is when the 50 points will be delivered. I suggest in one hit on Tuesday.”

Young Adam obviously can’t be expected to know, but I’ve been writing about the Reserve Bank and its decisions for 30 or so years.

I’m now giving him official and public permission to never read me again; to stay in blissful youthful ignorance.

This is what got him all roused up.

Enjoy your victory lap Terry! I’ll have a response for Mr McCrann but it won’t be personally insulting, ageist, and definitely won’t contain a third paragraph that’s a run-on sentence with five sets of double quotation marks, two sets of single quotation marks, two long dashes, two commas and a semi-colon. The most puzzling one of all is the double-quote around “Adam Button”. Yes, Terry, that’s my real name.

Update: Here is the problem with the Terry McCrann’s of the world 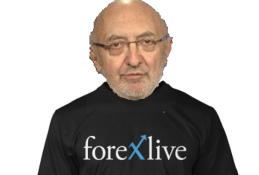