A Bitcoin futures trader at OKEx was allowed to accumulate a futures position with a notional value of about $416 million leveraged at up to 20:1.

As that position blew up on this week's Bitcoin decline and the exchange wasn't able to force the trader to liquidate. That led to a loss at the exchange, which evidently has a "socialized clawback" policy that allows it to steal profits from other traders who are holding in-the-money positions.

The exchange took 18% of profits from futures traders with unrealized gains in order to settle the bill. Here's the chart from Bloomberg. 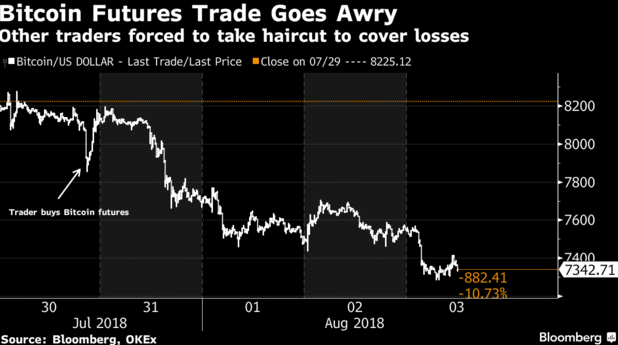 "In order to prevent socialized clawbacks from occurring, we have been working really hard to optimize our risk management system, such as launching price limit rules, early forced liquidation system, forced liquidation order price adjustment and more," the company said in a statement.

And what kind of risk-management system is this?

"The client with user ID 2051247 initiated an unusually large long position order (4168515 contracts) at 2am on July 31 (HKT) and triggered our risk management alert system. Our risk management team immediately contacted the client, requesting the client several times to partially close the positions to reduce the overall market risks. However, the client refused to cooperate, which lead to our decision of freezing the client's account to prevent further positions increasing. Shortly after this preemptive action, unfortunately, the BTC price tumbled, causing the liquidation of the account."

On top of all this, the forced liquidation may have contributed to the Bitcoin price decline this week.