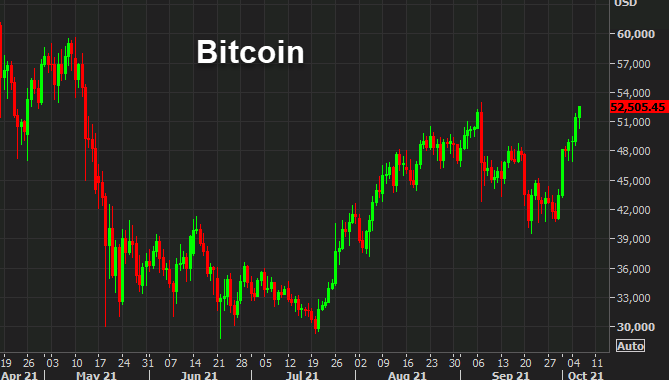 What's driving the latest leg of bitcoin strength?
One theory is that it's debt ceiling concerns. Fear about the debt ceiling and US default is certainly on the rise. 1-year CDS have risen 22 bps in the past week, though that still prices only a tiny chance of default.
Whatever the reason for bitcoin's rally to $52,000 from $42,000, the chart tells the story. It's now bumping up against the September high of $52,948, with less than $300 to go.
A clean break puts the May high of $60,000 square in the sights of bulls while a failure would raise the possibility of a double top and a return to $60,000.
I don't think there's any need to complicate the trade here, go where the market tells you and ignore the debt ceiling noise -- the US isn't going to default.
Invest in yourself. See our forex education hub.