On Friday, a large 5000 BTC order on Bitstamp (about $39M at the time of the order when the price was trading around $7800), sent the price of bitcoin tumbling lower as the broker scrambled to fill the order. According to reports, the order was filled by Bitstamp at $6200 ($31M value at execution - that's some slippage folks).  That is a 20% fall. Ouch.
Bitstamp tweeted at the time:

"A large sell order was executed on our BTC/USD pair today, strongly impacting the order book. Our system behaved as designed, processing and fulfilling the client's order as it was received."

The low price on Coinbase was dragged down with it. but bottomed at $6600, saving customers who may have had stops below that level from liquidation. However, plenty of positions were likely cleared out on the crash.  It also is a reminder that risk has three parts:
When ranking bitcoin on the risk-o-meter, it can have "Red hot" levels in each of those types of risk.  Traders have the choice to take it on, and live with it, or choose not to.
At the very least the risk profile, should at least give traders a "cause for pause" on whether to even enter the bitcoin waters.  If ok with sticking a toe in, it should also give pause as to how deep should you go in.  That is, because of the high risk, don't have it as your one and only investment/trade.  That just does not make sense.
Other ways to hedge risk is to be cognizant of the technicals. 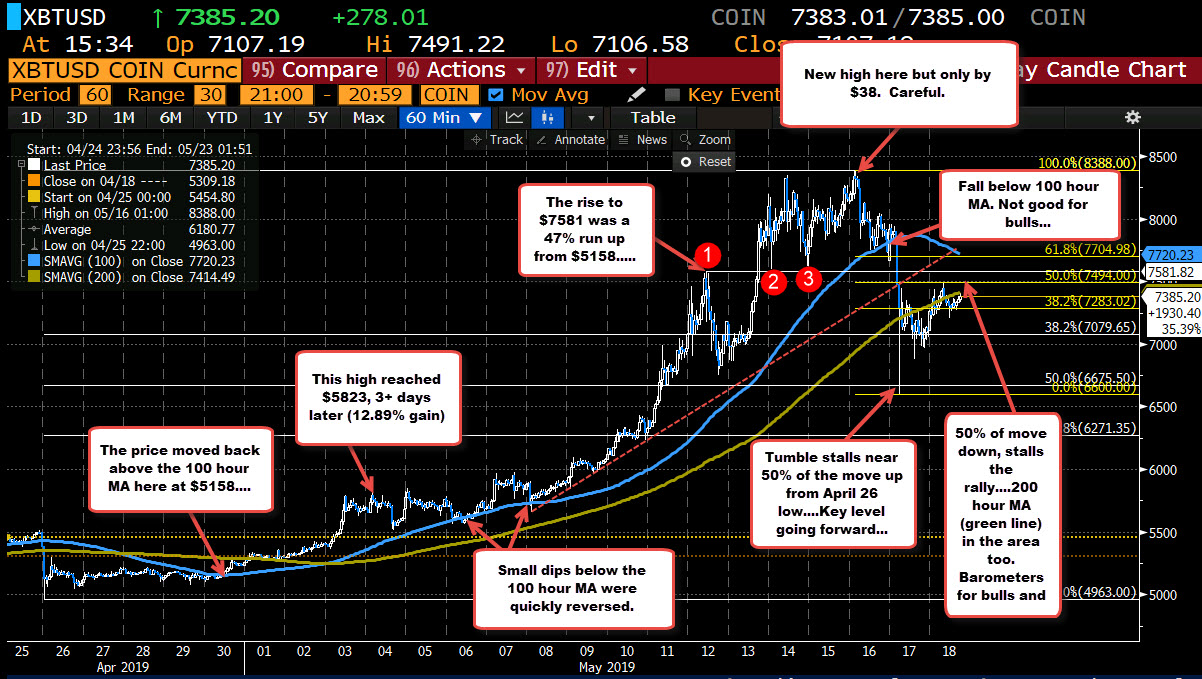 Looking at the hourly chart above, what can you notice about the trend move higher?
The blue line - which is the 100 hour MA - was broken on April 30, and the price moved higher.  The first move higher was just a fraction of the eventual overall gains (to $8388), but that first run higher did go from $5158 to $5823 or 12.89%. The price did correct below the lagging 100 hour MA on May 6 and again on May 8th (for a single bar), but dips were very modest and short from a time perspective.  Nevertheless, if liquidated on those moves, you always have an option to get back in when the break failed.
The run higher did not go below the 100 hour MA until Friday - the day of the crash, when the price moved below and back above the line, and then plunged through.  The prior three days were also more consolidative in trading with a near double top (but note a failed new high on May 16) and lows centered around $7581.
If you are trading an instrument that is as risky as bitcoin, those nuances should be a warning sign at the very least.  Traders needed to be scared a little of what might come next.
What now?
The tumble took the price down toward the 50% of the move up from the April 26th low (start of the run higher) THat level comes in at $6675. As mentioned the Coinbase low stalled at $6600.  That 50% area becomes a key support area now.
The move higher has so far stalled at the 50% of the tumble lower at $7494 (the high today has reached $7491).
So the buyers and sellers are battling it out with dualing 50% retracements (one of the move higher, and one of the move lower) defining risk/bias on the topside and bottomside.  The 200 hour MA at $7414 is also in play (we currently trade just below that MA).
Buyers/Longs will feel more comfortable with a move back above the 200 hour MA and 50% at $7494.  Getting above those levels will have the longs/buyers next eyeing the falling 100 hour MA at $7720. Get above that level and the full bullish euphoria is back in play.
Sellers/shorts on the otherhand, may look to lean against the 50% area at $7494 and hope for a reversal back lower (toward the $6675 level again).  A break back below that level, should bring bitcoin even lower.
Now you may have a fundamental bullish (or bearish) story that makes you not care about the technical story.  The choice is yours.
However, do it at your own risk as the price action does give you an inkling of the market, event and liquidity risks, and can be used to ride the trends, but also protect those trend profits too.
ForexLive