There is no good news for tether

The big revelation in the crypto market today is that Tether is only 74% backed. That's from Tether's general counsel Stuart Hoegner in an affidavit submitted today in its case against the New York Attorney General.
""As of the date [April 30] I am signing this affidavit, Tether has cash and cash equivalents (short term securities) on hand totaling approximately $2.1 billion, representing approximately 74 percent of the current outstanding tethers."
This is a stable-coin that's supposed to be 100% backed by US dollars. The shortfall came after Bitfinex borrowed $600 million from associated company Tether because a loss of $850m in a crypto conversion gone bad.
The company (or companies) argue it's a loan agreement and the money is technically still there but none of it is inspiring confidence in Tether or crypto.
Or is it? Bitcoin is up 2.1% today while Ripple is up 6% and Litecoin is +9%.
But what's troubling is that Bitcoin is trading at a $325 premium on Bitfinex and that gap almost entirely opened in the past week: 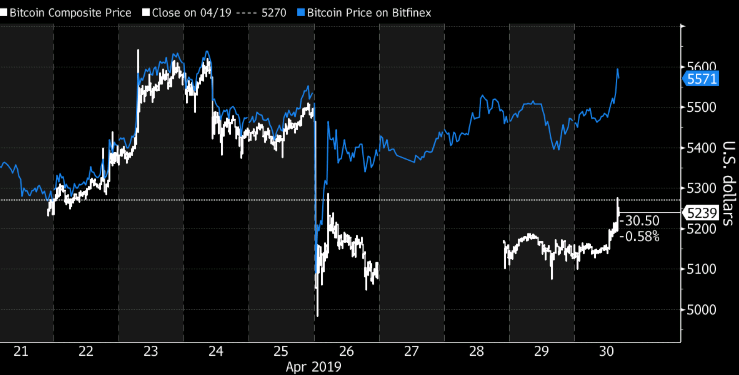 The thinking is that people are rushing off the exchange. The company has well-documented problems with wire transfers so many clients may be selling Tether and buying other cryptos which can more easily be taken out of the exchange.
More evidence comes from the company's cold wallet, which showed that Bitcoins worth $67 million were transferred yesterday. That follows a $90 million withdrawal on April 26.
So what next? Obviously this is bad news but there is some scope or hope. If it really is simply a loan then Tether could have all the funds and it's not as bad as feared. However if there are any other cockroaches in the Tether/Bitfinex machine, then they are going to crawl out soon and that's going to be an ugly look.
One of those things that's just developing is a set of fresh charges against two men at Global Trading Solutions LLC, which allegedly ran a shadow bank for Bitfinex and skirted anti-money-laundering provisions.