It's tough to find a reason for the Bitcoin jump, but this didn't hurt 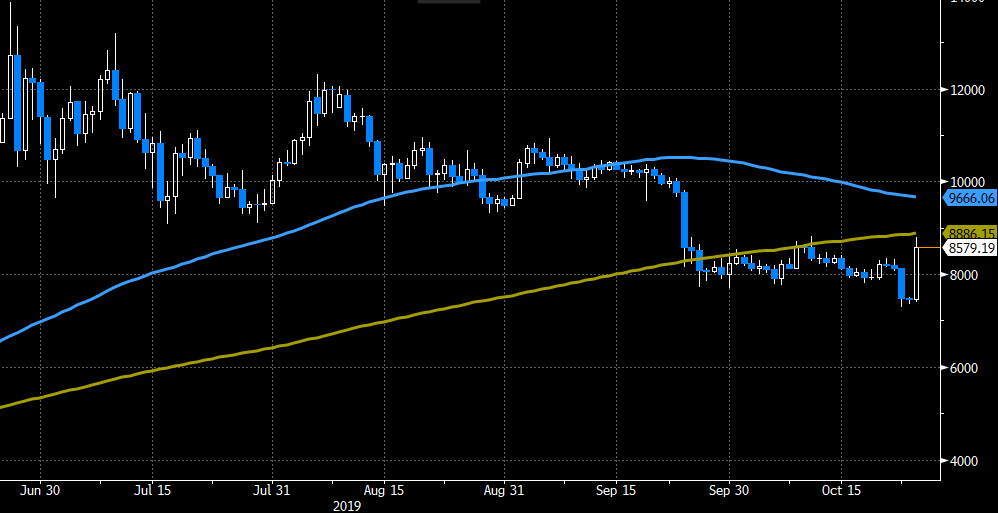 Bitcoin is up 15% today in a huge reversal from the breakdown earlier in the week. The move has stalled so far at the 200-day moving average but it's an impressive turnaround nonetheless.
Market participants are pointing to the usual reasons for the rally: A squeeze, options activity and arbitrage but the fundamental news is also positive.
Chinese President Xi Jinping reportedly told the Political Bureau of the Central Committee yesterday that China needs to "seize the opportunity" of blockchain technology.

"We must take the blockchain as an important breakthrough for independent innovation of core technologies," Xi told committee members. "[We must] clarify the main direction, increase investment, focus on a number of key core technologies, and accelerate the development of blockchain technology and industrial innovation."

These are believed to be his first public comments on crypto or blockchain technology.
This isn't any kind of an endorsement of Bitcoin and cryptocurrency trading is effectively banned in China but this is perhaps the highest level official anywhere who has endorsed blockchain technology; and a country that certainly has the resources to advance it.
As for the price move, it came some time after this news broke, so perhaps it's incorrect to connect the dots. Today is the CME options expiration and many are pointing fingers in that direction.
ForexLive