Bitcoin: Chance to buy or end of bull market?

What next for Bitcoin?

Bitcoin became an official currency in Salvador. The Bitcoin Law (Spanish: Ley Bitcoin) was passed by the Legislative Assembly of El Salvador on 8 June 2021, giving the cryptocurrency bitcoin the status of legal tender within El Salvador after 7 September 2021.

El Salvador bought its first 400 bitcoins on Monday, which was equal to $20 million. President Nayib Bukele pledged to buy "a lot more" ahead of adopting the cryptocurrency as legal tender.

Members of the highly famous Reddit forum called for a $30 worth of Bitcoin purchase to support Salvador's president's decision.

But as the famous proverb says: "buy the rumors, sell the news". Bitcoin dropped from $52 000 to $43 000 in three hours and many positions got liquidated.

In this article we will look at the Bitcoin logarithmic and Bitcoin domination charts, discuss the Bitcoin rainbow theory and look at the usual chart to predict an upcoming price movement.

The first thing you need to do to become a successful trader is to defy the market trend. Let's start with it! 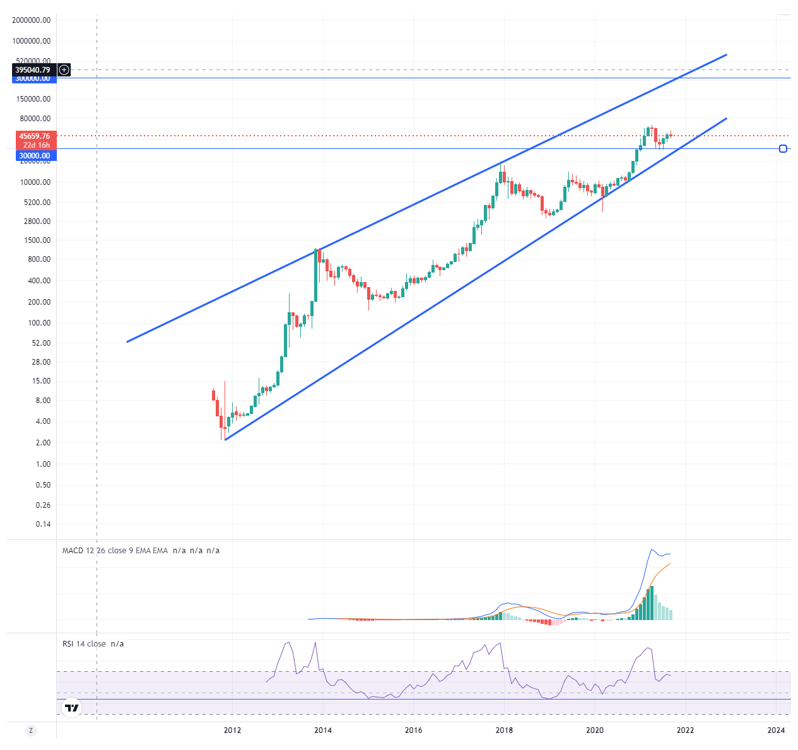 Bitcoin logarithmic chart is used by crypto traders to defy a potential trade reversal. As you can see, the RSI oscillator didn't return to its normal meaning (which is 44) and the MACD indicator shows the potential trend reversal. These facts tell us that the correction is not over, and Bitcoin might return to the bottom line of the channel, which is $30 000. If crypto-asset bounces back from this level a "double bottom" pattern will be drawn, and the massive bull run will begin. 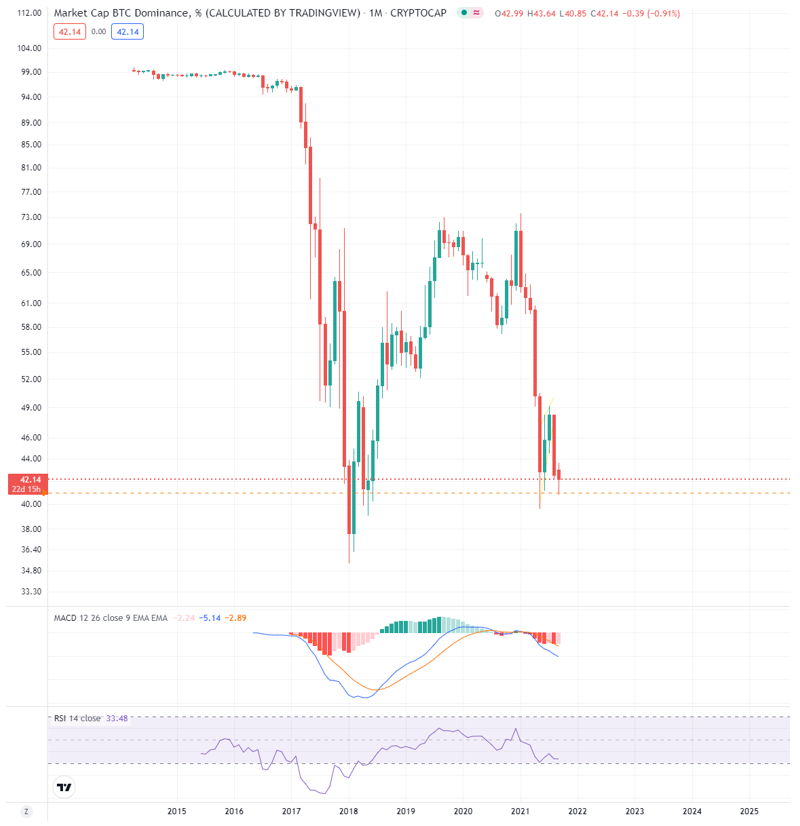 The dominance chart presents the Bitcoin attitude with all other cryptocurrencies. It is very useful for" alt-coin" season prediction. If the price goes down, altcoins are growing faster than the main crypto asset. Otherwise, when the price rises Bitcoin drops slower than altcoins do.

According to the chart, we can see that it reached the bottom and trying to reverse. As mentioned above it means that in the mid-term Bitcoin might fall and altcoins season is over. 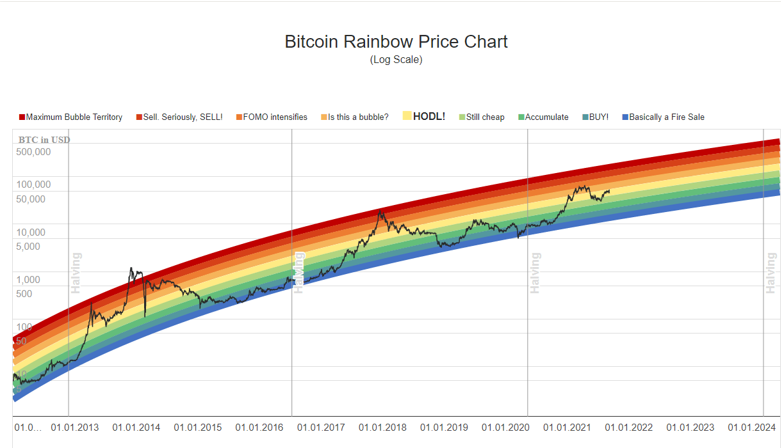 According to this chart after every halving Bitcoin reaches the upper (red) line of the rainbow. It didn't reach this range after the last halving, so traders expect it to happen. The target varies from $150 000 to $200 000 depending on what time it will reach the red color. 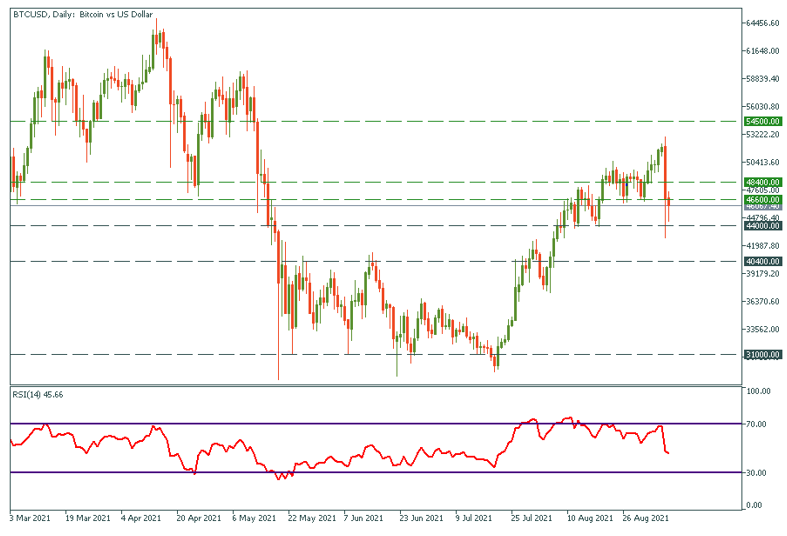 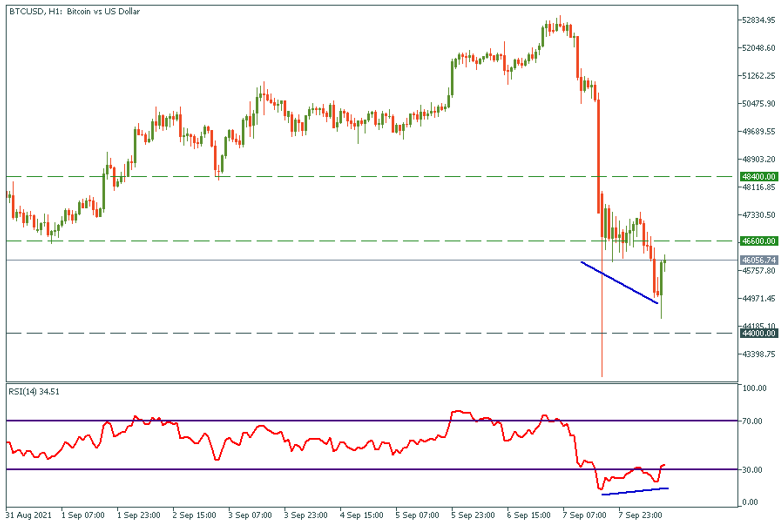 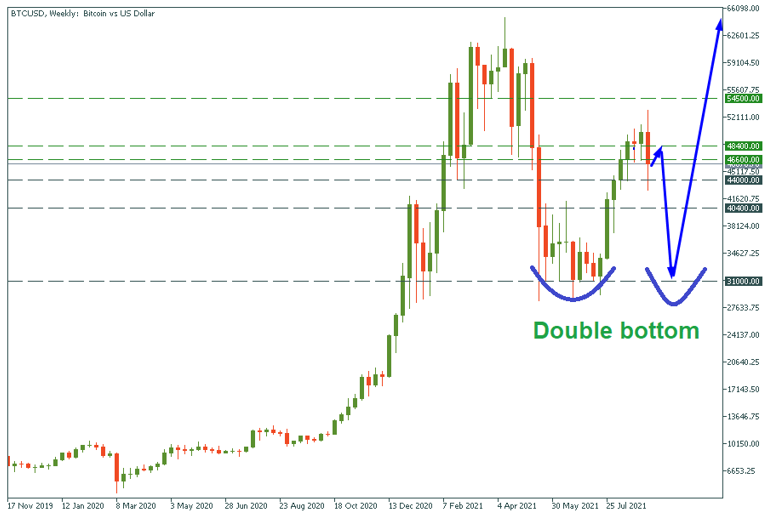 You can trade crypto with FBS in FBS Trader app or Metatrader 5.

The views and ideas shared in this article are deemed reliable and based on the most up-to-date and trustworthy sources. However, the company does not take any responsibility for accuracy and completeness of the information, and the views expressed in the article may be subject to change without prior notice.
Invest in yourself. See our forex education hub.