A closer look at vaccine delays and its impact on markets 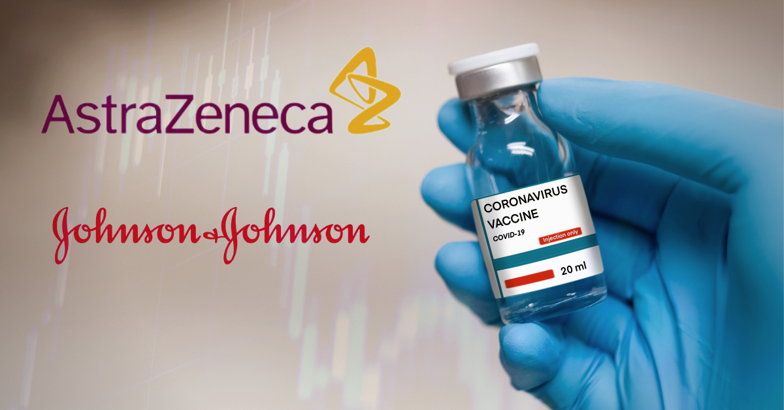 As economies reopen, Covid-19 vaccinations have been in great demand. This has led to early optimism that there is finally a ray of light shining through the coronavirus cloud.

Looking back to this time last year, the emergence from the pandemic's first wave was probably a bit too optimistic. When the eventual second wave commenced, we met further lockdowns as the infection rate eclipsed that of the first wave.

With that said, this time around, the world has actual vaccinations to fight the spread of the virus and combat record job loss, GDP declines, and economies that have fallen into double-dip recessions.

However, recent reports about the safety and effectiveness of the AstraZeneca and Johnson & Johnson jabs have come into focus.

The initial rollout has been plagued by issues, including questions over misleading data and missed deliveries that clouded the public's perception, as other vaccines raced ahead.

What are the main concerns?

Basically, recent reports of blood clots in various recipients who have received the shots have led to several countries temporarily stopping the vaccines.

Unusual blood clots have been detected in a handful of people's brains after receiving the vaccination.

This has led to a series of countries suspending the jabs over concerns that the clots are very rare side effects of the vaccines.

Is there any proof that Vaccinations are Causing Clots?

Following weeks of speculation, European drug regulators have now confirmed that there is a possible link.

The European Medicines Agency stopped short of changing its guidance on how the vaccine is used, however. They maintain that the overall benefits still outweigh the risks, while some nations such as the UK, restrict the use of the shot to older age groups.

This could become the norm in other nations too, depending on the ongoing data coming out of the post-Covid injection results.

However, PRAC, the Pharmacovigilance Risk Assessment Committee, has reported that blood clot risks do not outweigh the benefits of receiving the vaccine.

Which Countries Suspended the Jab?

Before PRAC, from the beginning of March, Denmark has led the European bloc in suspending the AstraZeneca vaccine. Germany, France, Italy, Spain, Portugal, and many other European countries followed suit not long after.

Indonesia even joined in at one stage, as they awaited further information from the World Health Organisation.

By the end of the month, however, the suspended nations agreed to resume using the injection after being ruled safe to use by regulators.

A similar occurrence happened with J&J. In fact, Greece recently suspended the jab for the same reason. That said, the company will restart shipments of its vaccine to certain parts of the EU, after the continent's health agency concluded that the benefits outweigh the risks.

Both companies probably could have done without the negative press, as other vaccinations on the market such as Moderna and Pfizer are pressing on.

Recent studies suggest that most Europeans already view the vaccine as unsafe.

In Romania, for example, more than 200,000 people this week had their appointments cancelled to get inoculated. Despite the high numbers of daily cases in the country, almost 100,000 failed to turn up for their appointments.

Are the Numbers a Cause for Concern?

With the number of people that have claimed they have experienced side effects from the vaccine, the global picture looks minimal.

Out of every 10 million injections, you might expect to see 10 of these clots, with about 1 or 2 having fatal consequences.

But these figures usually don't mean much when someone is about to be injected with a life-saving vaccine currently in the news.

Is it Just Side-Effects That are Concerning?

It's not just the side-effects hindering AZ's vaccine. Hong Kong has recently halted its order for the AstraZeneca vaccine as concerns mount over its effectiveness against new variants.

Brazil and South Africa are also experiencing new mutated variants that could negate the effect of the inoculation.

So, since this issue is affecting all the current vaccines on the market, it doesn't bode well for a company that already has a grey cloud hanging over it.

What Are the Alternatives?

Currently on the market are a mix of licensed vaccinations from various companies. These include Pfizer & Moderna. Both of these inoculations work differently, and not all are available to every country.

What is interesting enough is that AstraZeneca's vaccine has not been approved yet for use in America.

Despite the demand, the vaccine is still in limbo in the US, where there is no concrete plan for emergency authorisation.

What's even more worrying is that US has placed limits on the number of vaccines it is willing to export. This has resulted in millions of doses of the vaccine gathering dust in storage warehouses, as the drug has not been authorised for domestic use.

What are the repercussions if there is no substitute?

Any delay in vaccination deliveries or further suspensions could have a heavy impact on global trade. This could be detrimental for Asia's economies, as their economies have recovered relatively quickly without falling under another lockdown.

Damaging reports to any of the vaccinations are a critical risk. Rollouts still need to commence rapidly this year for the global economy to get back on its feet.

If further countries follow Romania in rejecting the vaccine, this could lead to governments having no other choice but to adhere to additional restrictions.

Many countries do not have the luxury to pick and choose what vaccination they want, as the governments order a certain amount at a time.

Unfortunately, more wealthy countries can afford an oversupply for their population, while many poorer countries will have to wait for vaccines to become widely available.

What Else Could Be Affected?

Looking at a broader market scope, we have seen how oil and gold have vastly fluctuated over the past year. Every time we hear negative news on the vaccination front, traders look to safe-haven assets such as gold, and the oil sell-off occurs due to demand worries.

Adding to this, domestic currencies remain under the spotlight. The euro for example, looks at a potential slide against its main competitors as EU leaders continually struggle to meet their required target for the bloc's vaccinations.

If any further delays happen for European countries, this is likely to weigh heavily on its currency and indices.

On the other hand, America and the UK are conducting record vaccinations, as the US has already administered over 100 million doses, whilst the UK has issued over 30 million.

In the medium-term, these figures could weigh heavy on the countries that will have further delays with their populations inoculated. The EURUSD and EURGBP currency pairs will be something to look out for in particular, as the more Europe flounders under the vaccination rollout, the more costly it could be in the long run.

Travel restrictions, along with further lockdowns could ensue. This, in turn, is likely to affect attempts to emerge from the virus's shackles and could bring economies back down with a bump.

Where Does This Leave AstraZeneca and Johnson & Johnson?

At the moment, you could say they trail behind their competitors in terms of demand.

The public are currently ignoring the fact that these vaccines have proven to be highly effective. Despite the minimal risks, they are proven to prevent severe disease and hospitalisation and more importantly, save lives.

However, if countries have no other alternative, they could be forced to implement the jabs to emerge from any restrictions.

In any case, the firms will be hoping to leave this news behind them to fulfil their quota of deliveries this year. Any more suspensions would be detrimental for the companies, as they are a business and need to profit after all.
Invest in yourself. See our forex education hub.