Does the rally in gold still have legs?

Gold prices keep rising, as investors look for safe havens to hedge their riskier bets amid mounting concerns around the economic recovery.

The resurgence in infections across the globe and especially in the US is threatening to put the brakes on the economy's comeback, as businesses close again in several states to bring the outbreak under control.

It's not just uncertainty and haven demand though. The primary fuel behind gold's ascent is interest rates hitting zero or negative around the world, and expectations that central banks will keep them there for a long, long time. Gold pays no interest to hold, so it becomes more attractive compared to interest-bearing assets like bonds the lower rates fall and the longer they stay low.

Consider this: would you buy a German government bond that pays negative interest for 10 years, or gold that pays zero? Even American bonds that still pay out positive yields are unattractive, because once you account for inflation over a long period (real rates), they are also negative yielding. 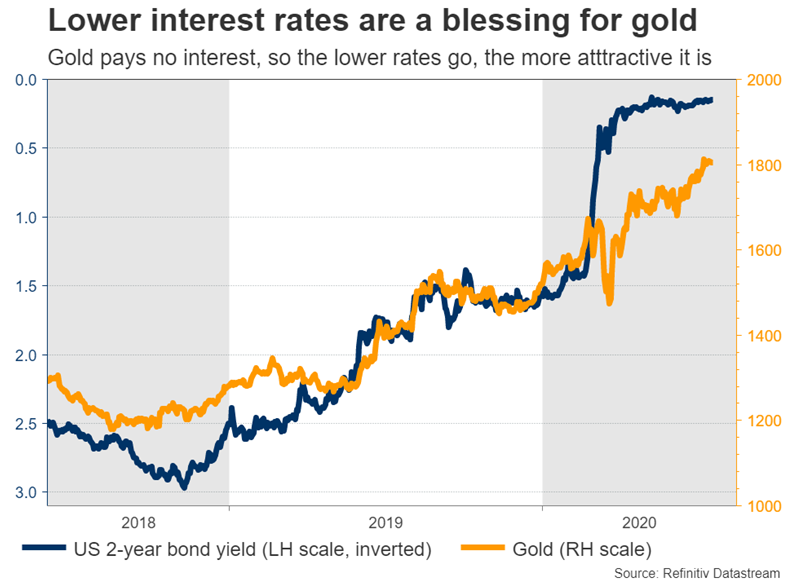 This is crucial because bonds are the largest asset class in the world, so with central banks making most bonds 'uninvestable', fund managers looking for decent returns are forced to find other alternatives. This also explains why stocks have recovered so powerfully.

Debt and geopolitics in the mix too

Then, there's fiscal policy. Government deficits are exploding due to the massive rescue packages, and higher national debts benefit bullion. A massive spike in debts typically raises concerns about whether governments will meet their obligations, and if so, whether they will do so by debasing their currencies.

The final leg of this bullish gold story is geopolitical uncertainty. Tensions between the US and China are still boiling and may escalate further ahead of the November US election. Trump is behind his rival, Joe Biden, in most polls, so picking a fight with Beijing could be his way of shifting attention away from the domestic virus situation and regaining some momentum.

Can the rally continue?

Most definitely. That doesn't mean there won't be corrections on the way - nothing goes up in a straight line - but eventually, we might see new all-time highs above the record peak of $1920, maybe much higher.

In fact, gold already hit new records if measured in any currency other than the dollar. Let's explain. Since gold contracts are denominated in dollars, bullion and the greenback have an inverse relationship. When the dollar appreciates, it becomes more expensive for investors using foreign currencies to buy gold, putting downward pressure on bullion.

This implies that the dollar's strength is the main obstacle keeping gold from cruising even higher. Yes, the greenback has fallen a little lately, but it remains elevated from a historical perspective. Hence, the missing ingredient that could accelerate gold's gains is a further drop in the US currency.

Now as for what could ignite such a move, look no further than the Federal Reserve. The US central bank has already done a lot to revive the economy, from slashing interest rates to zero, to even buying junk corporate bonds. But this doesn't mean the Fed is done.

As the spike in infections threatens to derail the recovery, the Fed will be under pressure to act again. The next step will probably be to strengthen the forward guidance, for instance by committing not to raise rates until inflation reaches 2.5%. This would send a strong signal that rates will be kept low for many years and would likely push gold higher, not just because of the 'low rates for longer' theme but also by hurting the dollar. It could happen as early as this month. 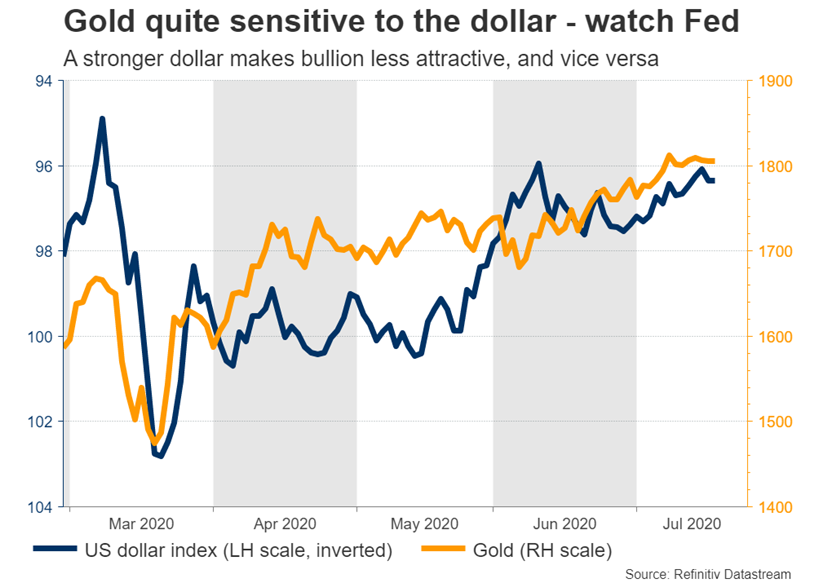 Once that's done, any further hiccups in the economy might call for more drastic measures. That could involve yield curve control where the Fed sets a target for yields on bonds of certain maturities, say 3-year Treasuries. This would simply be a more extreme form of committing to low rates for longer and would have similar market effects.

What about the risks?

While gold's bull run isn't in any immediate danger, there are two key downside risks that should nevertheless be considered. The obvious one is a virus vaccine being developed, leading investors to dump safe assets like gold.

Alas, it's anyone's guess whether that will happen in a few months, next year, or beyond. Even in this case though, the downside for gold may not be massive, since the other legs of the rally will still be there. Rates won't rise for many years, and government deficits will likely stay enormous. Plus, a vaccine may also hurt the dollar through the risk channel, helping gold stay afloat.

The other key risk is the virus situation spiralling out of control, leading to a repeat of the March meltdown where investors dash into the safety of the dollar, hurting gold. But that's somewhat unlikely too. Investors are more familiar with the virus risks by now, so even if the situation worsens, any selloff may be more 'orderly' than the panic we saw in March.

In other words, unless a vaccine is found or full-blown panic takes hold of markets again, the path of least resistance for gold is likely higher.

This article was submitted by XM.com.
For bank trade ideas, check out eFX Plus