Gold caps off dramatic first half of 2020: Where is the precious metal headed in H2?

Earlier in July, the price of gold passed $1800 for the first time since 2011, prompting excitement among investors. The marked culmination of a lengthy and sustained rise from $1500 that began earlier this year as central banks around the world ballooned their balance sheets.

The steady pace of this appreciation suggests it is a structural shift in the makeup of the market, rather than a fleeting bubble. What's been going on? Gold ETFs close H1 with record $39.5bn net inflows.

Despite supply disruptions, gold has experienced huge inflows since the start of the year, most notably in exchange-traded funds (ETFs). According to gold.org, in June total holdings leapt from $30.57bn to an all-time high of $39.5bn. Gold is often seen as a 'safe haven' asset, but in truth it has performed well in both good and bad times.

However, the present environment of super-low interest rates around the world has significantly reduced the opportunity cost of holding bullion.

On occasion, there have been trading sessions where traders sold gold for cash to cover losses elsewhere in their portfolios - especially during the heavy sell-off in March. This drove the price down, as seen concurrently in equities and other risky assets.

However, this fall was quickly corrected when a combination of the highly uncertain conditions created by the Coronavirus pandemic and the massive stimulus packages embarked on by governments and central banks drove demand back to precious metals.

The net result of all this drama was to drive gold into uncharted territory against not only the US dollar, but other major currencies such as the euro.

The upside risk on gold 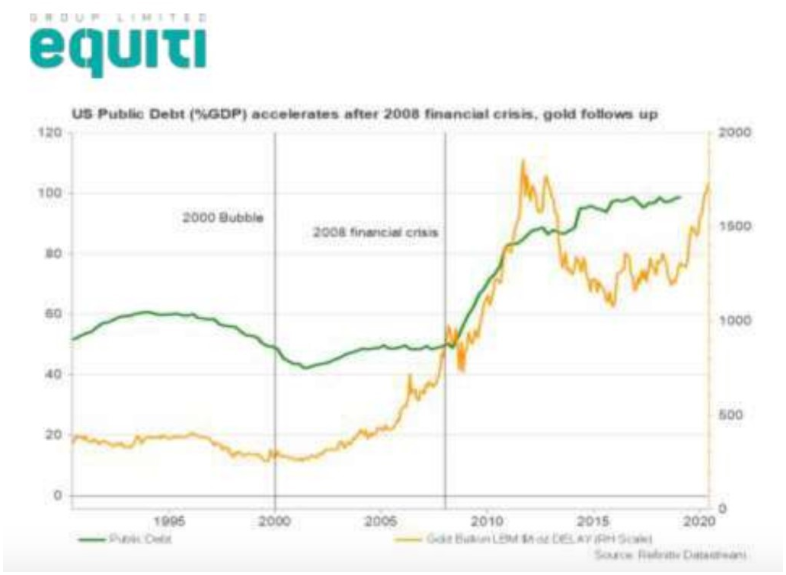 However, this picture is not entirely rosy for gold bugs. There are several risks on the horizon for holders of the asset, with the most significant being the possibility that traders could seek to 'buy the dip 'on US equities as ultra-high fiscal deficits potentially undermine confidence in the dollar as the US moves towards its November election.

If we look at the period immediately following the 2008 financial crisis, the US public debt-to-GDP ratio more than doubled, triggering a bull run in the gold market (see the chart from Refinitiv below). Something similar happened after the dotcom crash in 2000 and after the Wall Street Crash in 1929.

There is every reason that, with the US deficit set to quadruple, history could repeat itself. The government would then be faced with hard decisions over whether to raise taxes or cut spending, either of which would have an uncertain impact on growth.

In the current situation, there is good reason to think that the market maybe correct in its attraction to gold as the current expansionary monetary policies in key nations are effectively financing fiscal spending.

This is in contrast to the QE programs of the past decade, which essentially propped up bank reserves. If inflation does pick up, the G-3 central banks (the Fed, ECB and BOJ) are unlikely to instantly reverse course as their priority at this point is resuscitating demand in a post-Covid world.

That, in turn, will drive real interest rates lower, making gold even more attractive as an investment.Additionally, the rise in gold prices could also bring turbulence to the stock market.Although equities often rally in an inflationary environment, this most often happens when prices are rising fast and investors simply re-price assets in nominal terms.

Low-level inflation, however, can be toxic for stocks, especially in an economy with little pricing power as it erodes corporate profit margins -but gold is on hand to, as ever, act as a counter-inflationary hedge.

How far can gold go? $3000 an ounce?What can we expect later in the year?Analysts at Bank of America, for one, are optimistic on the outlook for the yellow metal, raising their 18-month price target to $3,000 an ounce, more than half as much again as the nine-year old record of around $1,921.Why such confidence?

With the increase in demand for gold mutual funds and the prospect of seemingly endless monetary expansion from central banks, they see a bullish future for gold as demand is only likely to continue during the crisis.As the saying goes, the Fed can't print gold.

CME responds to gold market logistical developments. Another reason to think gold's bullish run is likely to continue is the new gold futures contract launched recently by CME group.While the promise of unlimited stimulus by the Fed send it soaring in March, London's gold spot market has lagged behind the prices on the Comex futures exchange in New York.

Spot gold prices fell far below U.S. gold futures, as air travel restrictions and refinery closures hampered shipments of gold to the US to meet contractual requirements. Both gold spot and future prices normally trade within a few dollars of one another, but at one stage on the difference was more than $70.

This has forced the London Bullion Market Association and several major banks that trade gold to ask CME Group to allow gold bars in London to be used to settle its contracts to ease disruption to trading.

London is a key gold storage center that uses 400-ounce bars which must be melted down and recast as 100-ounce bars to be accepted by Comex in New York. This contract will enable delivery in New York of kilogram, 100-oz and 400-oz bars for maximum flexibility.

CME has announced that the contract will also be available for inter-commodity spread trading against the GC benchmark gold futures contract, giving existing future (GC) traders efficient access to this new market -and hence creating yet more demand in gold.

This article was submitted by Equiti.