Qualcomm stock is making the biggest moves: Will the rally continue?

What to make of the latest moves in Qualcomm?

Qualcomm triumphantly ended July with a massive 15% gain in 24 hours. QCOM.US broke free from the significant resistance at $95 on Thursday and peaked at $107, going past for the first time its previous highest point at $96 last January. It is now trading at $110 and is up by 24% this year to date.

The massive spike last week came after Qualcomm announced that they finally closed a settlement agreement with telecom giant Huawei Technologies Co. The long-awaited patent-license settlement will push Qualcomm's expected profit and revenue in the present quarter.  Qualcomm anticipates an increase in unadjusted fiscal fourth-quarter earnings from $2.12 to $2.32 per share with an $8.1 billion revenue (from $7.3 billion). It is beyond analysts' estimates. 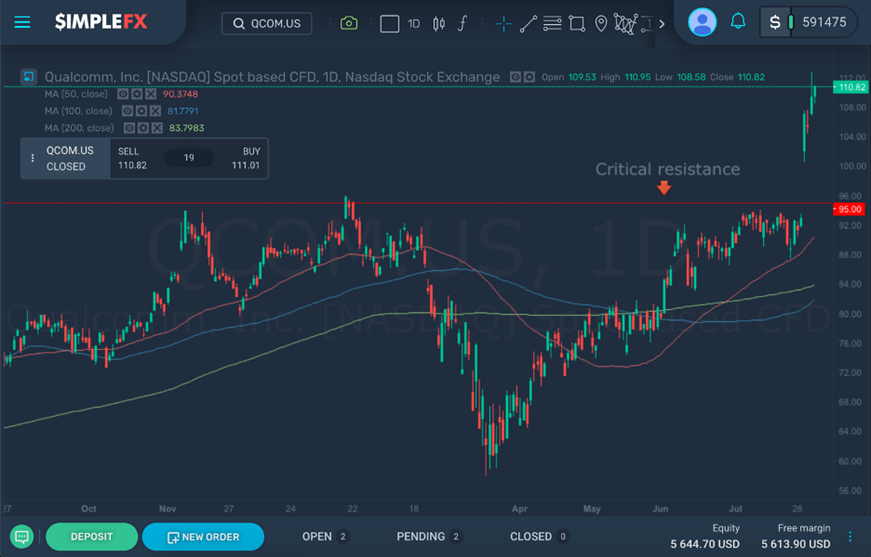 QCOM.US breaks the resistance at $95 on Thursday, SimpleFX WebTrader

On Monday, QCOM.US leaped another 3.8%, recording the current all-time high at $112 after Bernstein analyst Stacy Rasgon upgraded the stock from "market perform" to "market outperform." He said thatQualcomm is an attractive option for investors looking into 5G technology and that it may even sell chips to Huawei in the future. Ragon added that the chipmaker's management team is performing better and that the chipset margins could go higher than 20% because of the ramp in Apple smartphones.

Qualcomm is a developer of wireless technology and a designer of smartphone chips. They have CDMA and OFDMA tech patents, which are the skeleton for 3G and 4G networks. The company aims to be the leader in 5G network technology. Analysts project that Qualcomm could record a 30% revenue growth in 2021, thanks to its licensing business with Apple and Huawei and the mass adoption of 5G coverage.

Qualcomm is a strong competitor in the computer and tech stocks. According to Nancy Tengler, CIO at Laffer Tengler Investments, Qualcomm had the best chance to continue its rally to August among the top-performing stocks last month. In an interview with CNBC, she said that Qualcomm performed well in the last quarter with improved guidance, Huawei settlement contracts, and its 5G handsets. 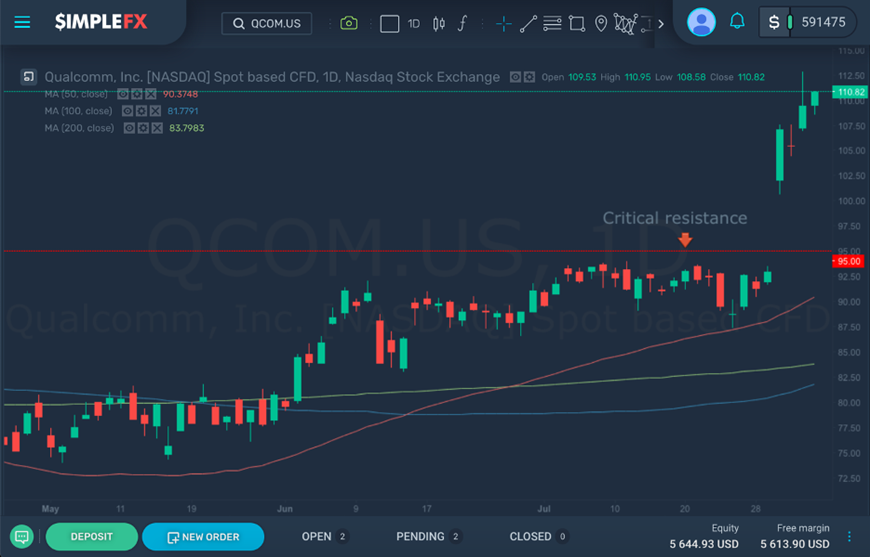 Qualcomm's market cap is now at $125.18 billion. QCOM.US is hovering above the 50-, 100-, and 200-day simple moving average lines, which is a bullish signal for traders and investors.

Interested in trading Qualcomm stocks? SimpleFX isthe most convenient way to trade popular stocks online. Trade forex, stocks, crypto, and precious metals on your laptop or smartphone anytime anywhere. No commissions. Guaranteed among the lowest fees. No minimum deposits. Open a SimpleFX trading account with only your email address. It's that easy!Start trading today.