Seven times and places to book your profits

Profits and when to take them

This article is in response to a comment made by Anwar on the 'five tips for when you are struggling article' that I published on September 07.  At the bottom of the piece Anwar asked for an article on 'taking profits'. 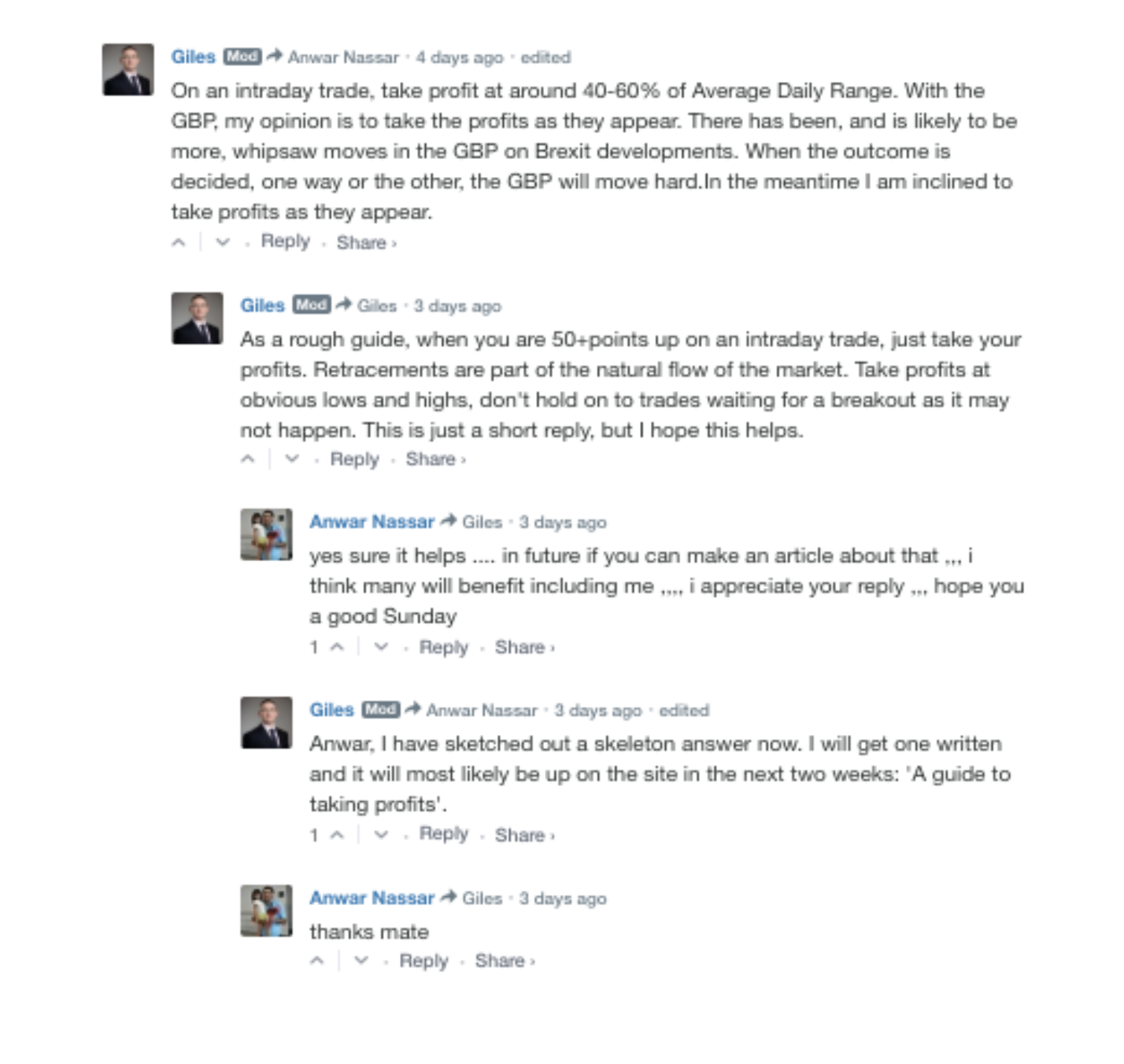 So, here it is for you Anwar.  An article on 'when to take profits'. This article will outline seven places and times where it is sensible to take profits. They will include: Support and Resistance levels, the 40-60% of the average daily range, prior to major news events, before weekends, at the London fix and finally at the end of FX sessions.

The temptation when you are trading is to often to try and hold on to trades in the hope that they will crash through key support and resistance levels. This is a common trap to fall into. In reality, unless there is some extremely significant news, most daily support and resistance levels hold on the first test. As a result take profits when your trades go into those levels. Here is a simple, recent example. The GBP/USD pair has been sold heavily on Brexit concerns. The GBP fell down into the key daily support level of 1.2000 with seemingly little to indicate the GBP should be bought. This 1.2000 level was the ideal place to take profits. The temptation, going into 1.2000,  would have been to try and hold for the break of that level. It would have not been hard to convince yourself that 1.2000 would break.  Savvy traders, however, booked their profits and then waited for a 'fresh catalyst to get short'. The general rule of thumb is this: take profits at key support and resistance levels. 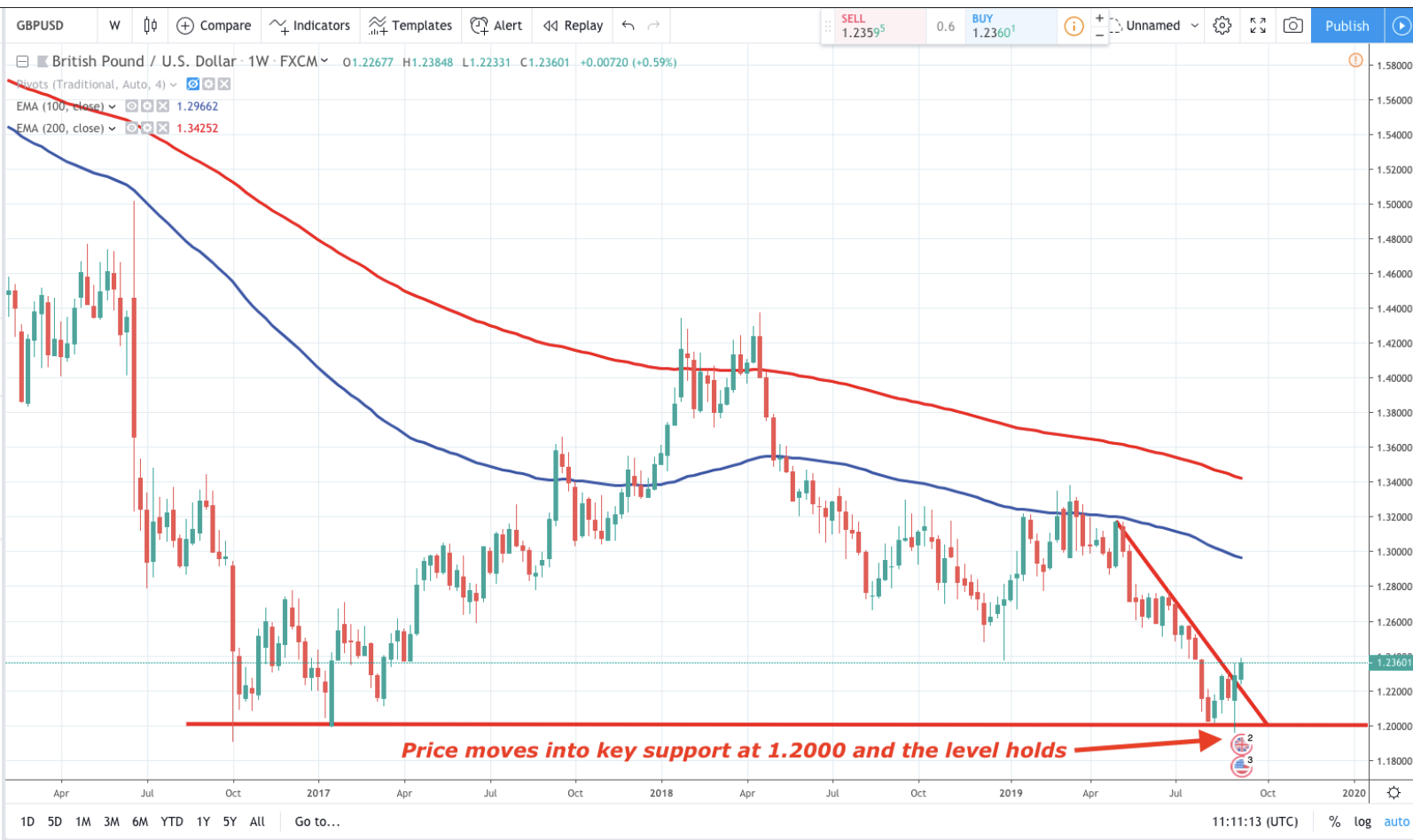 Average Daily Range: take profits at 40-60% of the ATR for intraday trades

You analyse the currency pairs, pick your favourite pair and then you find yourself in, and in profit. Great. Again the temptation is to hold that for a home run. Although there are times to hold your intraday trades, the general rule of thumb is take intraday profits at around 40-60% of the average true range. You can plot the ATR on your chart.  This is usually around 25-50 points depending on the pair. Book those profits. Find your standard ATR indicator under 'indicators' in your MT4 terminal.

You should always be aware of when major news is coming out. Generally speaking again, unless you are deep in profit (75+ points), you should take your profits. The temptation is to bring your stops to break even and try and catch a new move. Sometimes this can work, but if price is close to your entry , say sub 30 points away, then the news event, associated spread increase, and general volatility will often hit your stop. You end up with a break even trade (only to see price continue in the expected direction). So, if you are 100+ points in profit prior to major news, then holding through makes more sense. Otherwise, once again, book those profits before the expected volatility.

Before weekends: Take profits before the market closes

Why have the weekend stress by holding positions over the weekend. Better to exit on Friday and enter again on Sunday/Monday. With Donald Trump being so prolific on twitter ,and the multitude of global risks we have at the moment it makes sense to close profits on Friday. It was on Friday August 23 when Adam reported on Trump announcing fresh tariffs on Chinese products after the market closed. Now, the sentiment was obviously for a safe haven play into the close, but even so the point is that unexpected events can occur on the weekend when you can't quickly close your position. I remember at the time that one forexlive.com reader was short gold into the close. I expect they had a very unpleasant weekend wondering what price Gold would gap higher to on the Sunday open. Not a nice scenario that we can avoid inflicting on ourselves.

London fix: be aware of price movements around the London fix

A number of currency transactions take place at the London fix. These are currency orders placed by clients needing to make transactions for wage bills and general business costs and money movement.  Many of these transactions take place at 1600GMT and you can often see some unusual price movement around this time. It pays to have an awareness of price at this time as a sudden pop into a nearby support or resistance levels may be a good time to take profits. There are obviously some dark arts involved at this time of day, especially if traders are aware of large orders that clients are due to make at the London fix. One time to be aware of.

At the end of FX sessions

The end of FX sessions are good times to take profits. Each foreign exchange trading day can be divided into three different sessions: the Asian, European and American session. The session times can be seen in the chart below with GMT and EST times marked. In the chart below, the Tokyo and Australian sessions occur during the overnight and Asian session. This session has smaller volumes of trading activity and ranges are far narrower than in the other two trading sessions. As a result, you would use smaller stops and targets as the overall movement of the market is likely to be reduced. The end of the Asian session runs into the London/European session and the FX markets start to move into greater ranges. As the London session traders head out for their lunch, traders for the New York session arrive at their desks. Taking intraday profits prior to London lunchtime  1200GMT makes sense as traders in Europe close out positions before going out to lunch. moving Now, for a period of about 4 hours, the London and New York session's overlap. The best session to trade is the London session since it overlaps with the US session. In the chart above we can see that the London session opens at 0800 GMT (London time). That session runs for about four hours until the US session opens at 1300 GMT. From here there are four hours in the afternoon where both the London and the New York trading sessions are both taking place. Around 70% of all foreign exchange transactions take place during the hours of 0800 - 1700 GMT. It is the busiest time of the foreign exchange day.  The second part of the New York session is quieter that the first part, as the London traders have gone home. The close of the trading day happens at the end of the US session and the next day it starts all over again with the start of the Asian session around 0000 GMT. Volatility gets low from here, so again taking intraday profits now makes sense as the markets re-sets again ready for the Asian session. 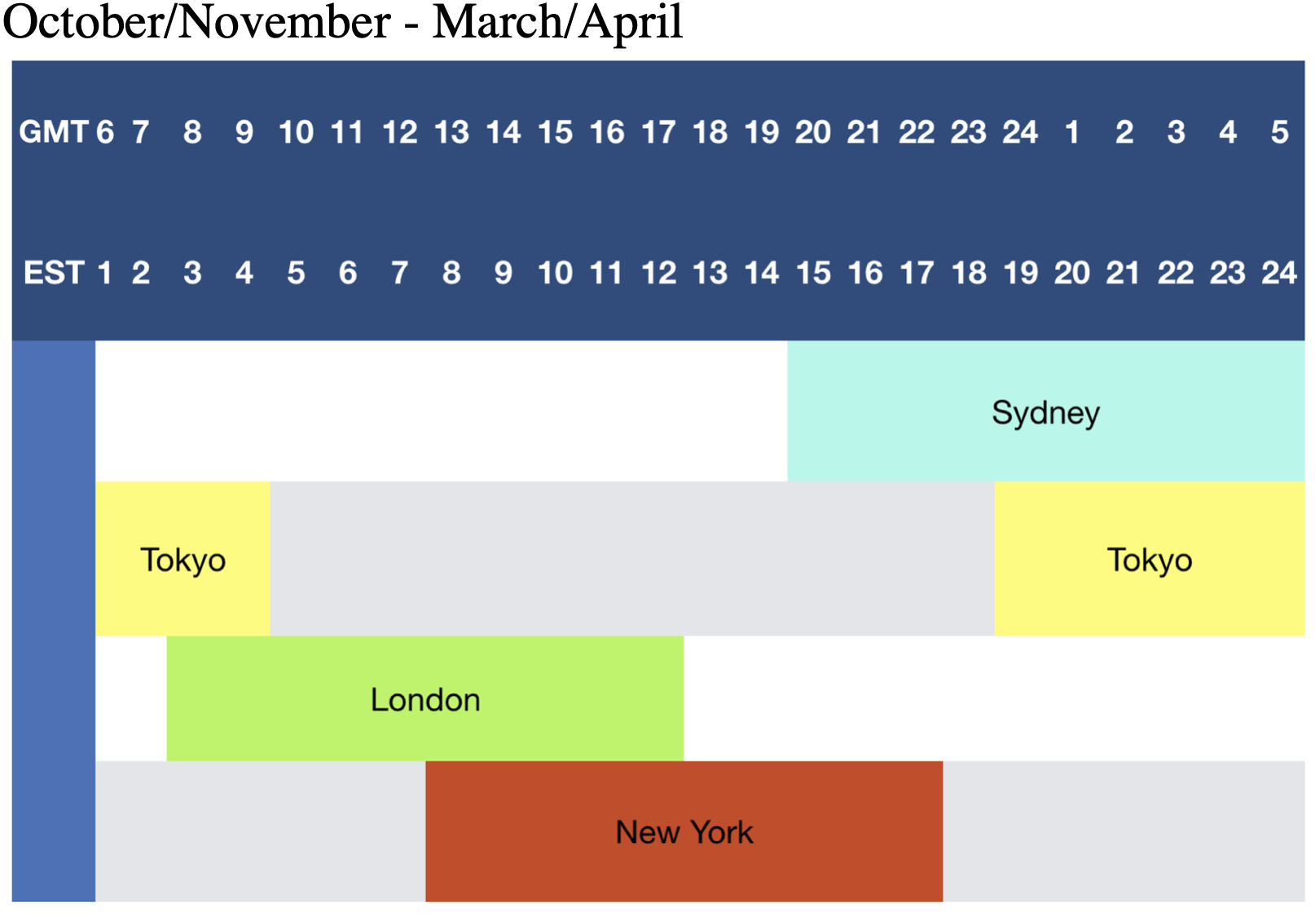