The jump from trend to bubble is faster than ever 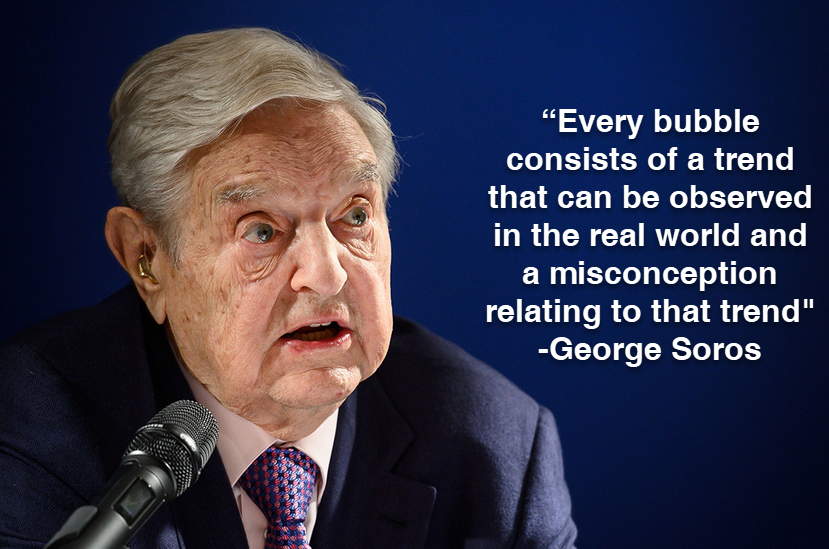 I love this quote from George Soros because it is more true every day. He said it in his book on the crash of 2008 but he might be talking about fake meat, marijuana or electric cars today.
We can all see trends towards environmentalism, renewables, e-commerce, the internet, eating out and TV streaming along with a dozen other things. The reaction function of the market is to identify a trend and throw money at it in a virtual gold rush, hoping that one day the claims will pay.
Last year we saw it in WeWork. Co-working was undoubtedly a trend and WeWork was the biggest and best-known name in the space. SoftBank and others drove the company valuation into the stratosphere but it all came crashing down when the collective conscience of the world realized the business model could easily be replicated.
The big macro trend of the generation is low and falling inflation. We're at the point now where every bond investor -- voluntarily or not -- is betting on low inflation. The perception (or perhaps misconception) is that inflation will stay low forever. If the market is wrong, it would be the mother of all financial busts. The bond market is worth more than $100 trillion with a myriad of derivatives layered on combined with endless knock-on effects, like mortgage rates.
Other trends are less controversial but misconceptions abound. Renewable energy is coming and the age of fossil fuels will one day end. Yet just in the past few years we've seen a dramatic drop in investment in fossil fuels. While a 50-year investment in a oil field is a bad idea, there is unceasing demand for the next 15 years. If no one is bringing on new production in the meantime, what happens to the price?
I often think about the paradox of a remote mining town. With mines, you usually know the lifespan so you know when it will close, everyone will be out of a job and the local economy will collapse. That leaves the housing market in a precarious spot. At the end of the line, you want to be a renter but somewhere before that, it makes more sense to buy. When exactly is the crossover? As the time winds down, you would assume there is massive demand for rentals and that market could become completely disconnected. Any way you look at it, the volatility would skyrocket.
That's how I see the fossil fuel era ending. It's like a mine right now that has a short life. It's past the point where people are investing in projects that have a payback period of more than 30 years. Yet it's still highly uncertain when oil won't be needed anymore. One belief was that shale was a perfect bridge because it could be ramped up quickly and operations have short shelf lives. However that turned out to be a misconception itself and wells are costing much more.
The final piece of the puzzle is price. I think it's inevitable that we get a spike in oil prices but even at $80, $90 or $100 we may find that companies are loath to invest because the market won't reward it and won't believe high prices will last.
Markets are the best way to price anything but in a changing world, be wary of identifying any 'trend' and assuming it will lead to profits.