There are times when moving average technicals don't say much to me...

The USDCHF is not saying much to me at the moment, but I will talk about it anyway....

Most times, I can make some logical sense from the picture of a chart.  It's no secret, the 100 and 200 bar MAs are important in my analysis. They tell me a story every day.
Why?
Because traders ALL over the world are looking at the same picture and the same (similar) moving averages (MAs). Trading decisions can be made that focus on defining risk. Technical's - like MAs - provide a basis for defining risk.  That creates levels that tend to solicit a reaction either up or down.
You will see me write...."Stay above more bullish. Move below more bearish."   That is what technicals do for me.  The "borderline" - where it is bullish above and bearish below (like the borderline of a state or country) - tells me if I am in New York or in New Jersey, in Spain or Portugal, in Italy or Switzerland.
The fundamental story influence price action, but that story does not define risk.  Where is the risk defined from a fundamental story? When a new fundamental story tells a different story?  When the story is debunked?  When gold does this, the stock market does that, or oil does something else?
Typically, the fundamental story is cahoots with the technicals.  If the price moves higher, the story can often be written to support the move. Sometimes the FX guy is writing about gold. The gold guy is writing about FX. The bond guy is writing about FX and gold. The stock guy is writing about bonds and FX.
Anyway, there are times when I look at a chart and I don't see much. In fact I see "a market" (note in quotations) that is ignoring technicals, like my beloved 100 and 200 bar MAs.
Is that ok?
Does misbehaving price action debunk technicals as black magic, some sort of voodoo, or simple craziness?
No.....
The "market" (again in quotations) determines the price action.  The "market" is ALL the global traders who move the price up or down in an organized, efficient auction process.
If the fundamentals are bullish, for the EURUSD, they push the price higher and the technicals - like the MAs -  support that move (i.e the price moves above a moving average or stays above a trend line). If the fundamentals are more bearish, the price moves lower and the technicals support that move (i.e. a trend line or moving average is broken to the downside).
Therefore, if the price action does not tell me much. If the technicals, which should give a picture of more buyers or more sellers, is not saying bullish or bearish or if it switches back and forth between bullish and bearish (i.e. stands on the borderline of NY and New Jersey in the middle of the Lincoln Tunnel and hops from one side to the other), it is not a fault of the technicals, but instead the fault of the "market" or collection of traders around the world.  They simple don't know what to do.
Looking at the USDCHF hourly chart below, may have some traders saying "All this BS about 100 and 200 hour MA is voodoo, black magic". 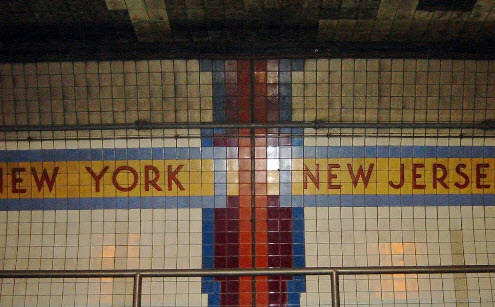 And like the guy in the middle of tunnel, not knowing where he is going, the "market" is saying the same thing.   That is, "I don't know where I am going".
That is frustrating. That can cause getting whipped around as a trader.
However, it should also prompt you to think "I should not be sitting in the middle of the Lincoln Tunnel. I need to disappear" (not go to NY or NJ).  In trading lingo, it means "Don't trade that instrument, UNTIL "the market" shows that it has a direction". Or perhaps.... look for a different borderline that seems to be working.
The good news is "the market" may not know now what it wants to do, but at some point it will figure it out.  The fundamental story might be risk on or risk off, or the SNB might do this or the Fed do that. However, when that happens, the price will show it. The price will reflect that "new revelation" and move/trend higher or lower.  If the price stayed at the same place all the time, traders will simply not waste their time.  Thank God, we have a propensity to trade and it is more fun when the price moves somewhere (into NY or into NJ). Markets transition from non-trend to trend at some point.
So how do you know when it is ready to move?
You really don't, but if you believe that non -trend will ultimate lead to a trend. it might pay to stick low risk "toe in the water" with an open mind that the "market" might agree.  Typically, that is not near the MAs (which are in the middle of the up and down range), but may stem from a break of the MA and say another hurdle.  Also, it might pay to be patient for an extreme and put a toe in the water there.
Looking at the hourly chart above, the 100 and 200 hour MAs have the price action chopping above and below.  UGLY.
However, the two highs today came in at 0.97277.   I like that level better even though it is close to the MAs.
On the downside, the low today was right at the low from Friday. HMMMM.
Traders who sold near the earlier high for the day, probably had a stop above the level. They stuck a toe in the water.
Traders who bought near the Friday low, probably had a stop below the level. They stuck a toe in the water.
The MAs ? They can give hope but don't trust them to be the spot to look to trade.
If you stick a toe in the water at an extreme technical level (yes they are still technical levels) and it goes your way, you have hope that the price next trends. However, it still has to get out of the quagmire that has defined the price action.  That is "the market" has to decide it is time to break and move away.  That requires targeting all the levels needed to "get to, and through". If done, you will be able to get out of the quagmire and enjoy some open road ahead for a change (get out of the tunnel and head down Broadway if in NY, or if in NJ, ride on the New Jersey Turnpike toward the suburbs).
Conversely, if the new extreme where you stuck your toe in the water does not work, get out and disappear.  Like a fellow trader in my distant path used to remind me, "Instead of trading, why don't you lie down until the feeling goes away" Sometimes it requires a nap until "the market" has a better idea (and conviction).
See here for global coronavirus case data