US election 2020: What happens to the US dollar with a Democrat clean sweep?

Some food for thought ahead of the November election

There are various permutations of results from this year's US elections, but polling data increasingly indicates a strong chance of a Democrat clean sweep of the House, Senate and White House.

Obviously, the question for forex traders is what this may mean for the USD.

Traditionally the US dollar performs well in election years. The dollar index (DXY) has only fallen in two of the last 12 elections, with the drop in 2012 only marginal. 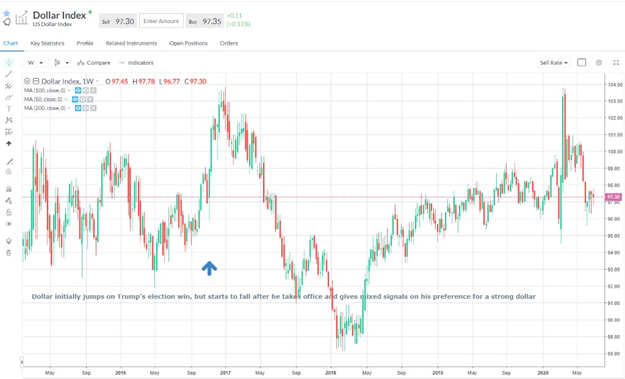 According to Morgan Stanley, the key is not who wins but whether you get gridlock in Washington or not. The bank sees USD strength from a Democrat 'blue wave', that is a clean sweep of the House, Senate and White House. But they also see USD strength from a Republican full house, as unlikely as that seems now based on the polls. The US dollar would be more likely to soften if Donald Trump wins but the House and/or Senate are controlled by the Democrats.

Historical patterns may not prove much use, however, due in large part to the massive amount of fiscal and monetary easing that has been carried out not just by the US but also its G10 counterparts. This has created an unusual backdrop to the election and means the waters FX traders are swimming in are murkier than usual.

According to researchers at Sweden's SEB, the dollar rose in the 100 trading days after nine of the past 10 elections from 1980 to 2016. Democrat wins produced a 4% rally on average, whilst a Republican victory saw a gain of 2%.

So, can we expect the dollar to rally after the election no matter what the outcome? It's clearly a lot more complicated, not least because of the unique macro-economic backdrop created by the pandemic.

Indeed, foreign exchange analysis from investment banks UBS and Crédit Agricole suggests precisely the opposite. One argument is that Trump's policies of fiscal stimulus and protectionism have supported the dollar, so a Democrat clean sweep could pull these legs from under the USD.

However, there are not many signs of the Democrats taking a more lenient approach to China, in fact both sides seem to be vying to be seen as tougher than the other on China. Therefore, trade disputes and battles of intellectual property rights will, in all likelihood, persist.

On the fiscal side, it's hard to see much difference - both camps back massive stimulus to support the economy post-pandemic, whilst the Federal Reserve is very clearly prepared to keep rates at zero for as long as necessary. The usual rules of the game in terms of how the dollar responds to fiscal and monetary policy inputs have to a certain extent been thrown out by the pandemic.

Donald Trump has been a little wayward in his messaging around the dollar's strength - it's normal for presidents to underscore the idea that a strong dollar equals a strong USA. The 'strong dollar policy' has been in place for at least 20 years and initially Trump was seen moving away from this stance.

Whilst he has been more resolutely in the strong dollar camp lately, there is always the risk that post-pandemic the president again calls for a weaker dollar to make the country more competitive.

Relative economic performance and relative expectations of interest rate differentials will be what matters. Will the euro rebound with a fiscal stimulus package? Will the pound stabilise after Brexit?

The euro matters most when we look at this other side of the dollar equation as EUR has an outsized weighting in DXY - more than 50%. So, when we look at USD, or DXY, strength we are also to a large extent looking at EUR too.

The European Central Bank (ECB) has like the Fed responded to the pandemic with a massive increase in its QE programme. Efforts on the fiscal side have been slower, but in spite of concerns among some member states about the nature of stimulus funding, there seemed to be a broad agreement on the need for support.

Crucially right now the more 'dovish' policymakers are the more it supports the currency - the worry is that not enough support risks growth, but also creates pressure in bond markets, leading to a widening of spreads between bunds and peripheral yields. The ECB seems to be in 'whatever it takes' mode, though we note German resistance to participating in asset purchase programmes. The risk really lies on the fiscal side.

Failure to agree to the fiscal measures being discussed as part of the EU budget talks would be negative for the currency. Whilst an agreement is the base case, it may not deliver fully on its promise and may be a watered-down version to the €750bn rescue fund put forward by the European Commission.

This article was submitted by Markets.com.
For bank trade ideas, check out eFX Plus