Will USD break lower or reverse higher over summer?

The fortunes of the USD going into the summer

Following an impressive Q1 which saw the Dollar rallying by almost 5% against a broad basket of its main trading counterparts, the global reserve currency has fallen out of favour over the last three months. The Q1 Dollar index highs, which printed neatly on March 31st, quickly gave way to a sudden and sustained sell off which has seen the index falling to lows of around the mid 89s, an almost 100% reversal of the gains in Q1.

The driver behind this stark shift in sentiment was the weakening of US inflation expectations. Across Q1, as the US vaccination program gained increasing momentum, the government introduced fresh fiscal easing and focus turned to reopening (both actual and expected), US inflation expectations began to ratchet higher. Traders began to anticipate that the lift-off in US inflation as a result of the combination of economic reopening and vaccine optimism would lead the Fed to consider removing its monetary easing - a process known as tapering.

However, across Q1 and into Q2 the Fed stuck to its guns and reaffirmed its view that any spike in inflation would be temporary in nature and would not lead the Fed to shift its policy approach this year. This rebuttal from the Fed was accompanied by certain data points which cast further uncertainty on the turbo-rebound some were expecting. A much weaker than forecast set of retail sales in both February and April raised questions. A weaker than expected jobs report in April also took the shine off a stronger than forecast inflation reading for the month. In response to this data, and with the Fed reaffirming its anti-tapering message, US inflation expectations receded, and the Dollar sold off.

With central banks remaining committed to keeping easing in place for the near future at least and with budding optimism linked to the reopening underway across many key economies, equities, commodities and other high yielding assets (including risk FX) have been higher against the Dollar, both benefiting from and reinforcing its decline.

So, now as we begin the final month of Q2, it's time to ask, is the Dollar heading lower still or are we looking at a potential rebound over the summer?

Firstly, looking at the COT data, the net-USD short position, although growing, is still way off the extended levels seen in Q3 2020 and in January 2021. This means that there is still plenty of room for USD to move lower in terms of positioning. However, in considering the fundamental backdrop, risks appear to be building to the topside here.

US Labour Reports in Focus

While data has been a little hit and miss, the general trend has been upward and with that in mind, there is a huge amount of focus on the US employment reports on Friday. Following last month's low print of 266k, the market is now looking for a reading of 645k. Additionally, the forecast is for the unemployment rate to reduce from 6.1% last to 5.9%. If these readings meet forecasts, or beat them, this is likely to resurrect the issue of fed tapering, sending USD higher. If the readings are firmly higher, this could see a sharp unwinding of USD shorts.

With inflation set to have jumped in May also, a strong US employment report (particularly if wages growth is seen higher again) might be all it needs to see the USD turn on a dime. Fed's Daly this week hinted that discussions around tapering are entering the Fed's universe, saying that the bank was now "talking about talking about tapering". This marks a clear hawkish development from Fed's Powell saying at the last meeting that it was too early to talk about tapering.

Given the fuller reopening and further progress with vaccinations seen across May, a strong release this week would bring inflation expectations back into full force, suggesting the likelihood of even faster growth over the summer, placing a greater emphasis on the Fed's June meeting. 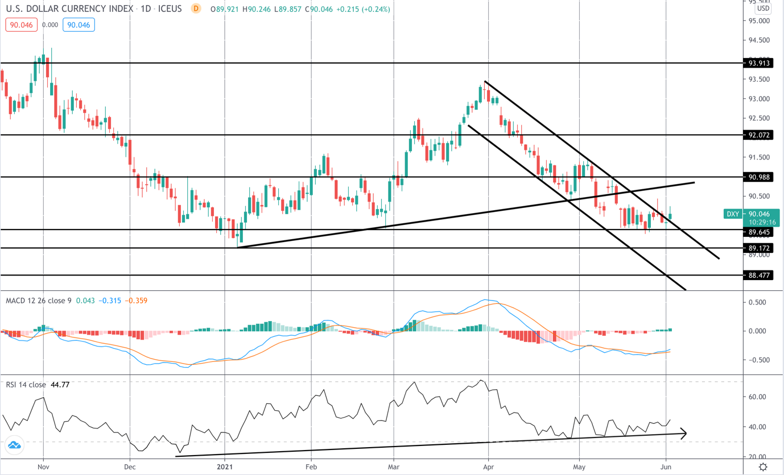 The sell-off in the Dollar index over Q2 has seen price trading lower within a narrow bearish channel. Price has also broken through the rising trend line from 2021 lows. However, the move has now stalled into a test of those 2021 lows and with firm bullish divergence on the RSI indicator and the MACD having turned bullish here, the prospect of a reversal is growing. The key upside level for bulls to break is the 90.98 region, which will turn the focus back to 92.07 and above.

This article was submitted by Tickmill.

Disclaimer: The material provided is for information purposes only and should not be considered as investment advice. The views, information, or opinions expressed in the text belong solely to the author, and not to the author's employer, organization, committee or other group or individual or company.

High Risk Warning: CFDs are complex instruments and come with a high risk of losing money rapidly due to leverage. 73% and 65% of retail investor accounts lose money when trading CFDs with Tickmill UK Ltd and Tickmill Europe Ltd respectively. You should consider whether you understand how CFDs work and whether you can afford to take the high risk of losing your money.
Invest in yourself. See our forex education hub.