Update: Vallance now says that 60% of hospitalizations are from unvaccinated people 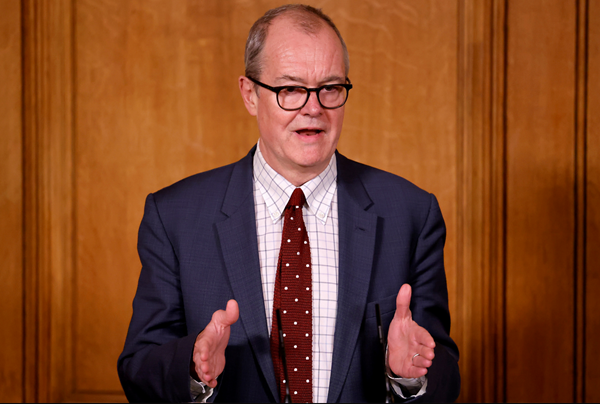 The UK chief scientific advisor Patrick Vallance said that 60% of people being admitted to hospital with covid have had both doses of the vaccine.
Update (four hours later he's correcting himself): 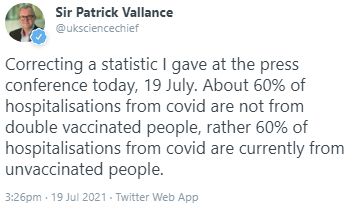 Everybody back in the clown car. You can ignore most of the analysis from below, but rest assured that you'll be seeing this information repeated by anti-vaxxers forever.
Five things jump out at me on this:
1) The numbers overall still matter here. If these hospitalizations are in people aged 90+, that's unfortunate but the brutal reality is that markets don't care and the public appetite to lockdown to save that cohort has waned.
2) The Astra-Zeneca shot isn't great. One of the things that are weighing on markets is that it's increasingly clear that MRNA vaccines are the only real solution to covid. They're safer and they work better. Vaccine hesitancy -- particularly to non-MRNA vaccines -- is rising and that stretches the timeline to vaccinate the world.
3) There's a law of numbers here. If 100% of people are vaccinated then 100% of hospitalizations will be from vaccinated people. What's tough to understand here is that 60% of the people in the UK have received both doses. All else equal, that cohort should be doing at least 70% better. The thing is, the vulnerable have been vaccinated at higher rates but they're also more vulnerable even if vaccinated because they're old and frail or already sick. Still, these numbers are tough to digest in any kind of positive way.
4) The news can become the story. The second order effect here is that some people read this 5headline and think "the vaccine is useless so I won't get it". It's already starting:
5) This is the kind of thing that troubles vaccinated people. Aside from nurses and doctors (god bless them), no one really cares if people who choose to be unvaccinated get sick. The anti-vaxxers aren't a drag on the economy. However if vaccinated people are scared of getting sick there won't be any kind of re-opening boom, or it will be badly curbed.
Here's another important comment from Vallance:

"Deaths are increasing and we will see an increase over the next few weeks, with daily deaths moving into the hundreds"

He also said daily hospitalizations could be back above 1000 in short order.
How are markets going to tolerate that? What will the picture look like in two weeks with nightclubs set to be packed, starting tonight?
A final notable point from Vallance was that most of the models they're using see a peak or a plateau in cases in mid-August.
Total hospitalizations are still low, but rising: