A debt ceiling solution is coming, here’s when

Get used to more weeks like this, the fight over US debt will be a long, bitter struggle

As I write this on Friday it looks like there may be a short term deal to raise the debt ceiling this weekend avoiding financial catastrophe for the time being. A bigger deal is supposedly being negotiated however this row has been on-going for more than two years and so I am sceptical of any grand bargain.

The longer and more bitter the dispute becomes the more difficult it is for either side to eventually back down. The two sides are deeply entrenched in their positions. Thus the rows over the debt ceiling and government spending, I believe, are likely to continue, possibly for years. That continued uncertainty and potential for automatic spending cuts is likely to have a dampening effect on the US and therefore the global economy. Consumer confidence surveys have shown that sentiment has been damaged by the latest mess although whether this is a temporary effect or more long term is difficult to measure, as is the economic impact. However at its September no-taper meeting, the Fed implicitly promised that it will make up for the mess created by Washington by continuing QE of $85bn a month. Consensus opinion is now expecting no taper until the beginning of next year, and that could be delayed even longer under new Fed Chairman Dr Yellen.

The market reaction to this mess has been very mixed. US equities were up over 2% on Thursday on a possible debt deal but the CDS prices are soaring as investors insure against default. Treasury bond yields don’t know what to make of this, whether to go higher to price in increased chances of a default, or to go lower as the Fed will be buying Treasuries for longer. But the key point is that it’s not that the US can’t pay its debt, it’s that Washington chooses not to do so. This is not the classic can’t afford-to-pay-default risk. It’s more of a political risk in the longer term and shorter term a which-bills-shall-the-Treasury-choose-to-pay-risk.

The 10 year Treasury yield is around 2.7%, barely moved from this time last week. A level that says quite categorically a US default is not going to happen. However the stresses are starting to show elsewhere, starting with the shorter US debt maturities. On Tuesday the Fed sold new one month bills at a yield of 35bps, a threefold increase from the previous week and almost the yield on the 2 year Treasury.

The chart below shows the yields for the one month US bill in red, the three year bill in blue and the 6-month bill in green. Clearly the big increase has been in the shortest dated US debt instrument, the one month bill, which makes sense given the threat of default is next week. But overall the bill market is much less complacent about possible non-payment. It also shows that the Washington impasse is starting to cost the American government and therefore ultimately the tax payer in terms of higher borrowing costs. 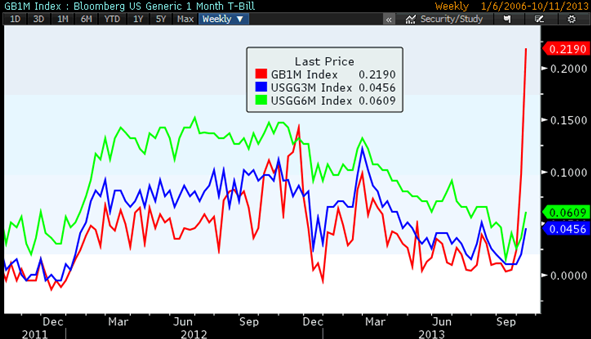 On Wednesday Nancy Prior, President of Fidelity’s Money Market Group, said the fund manager had started selling short term US government debt a couple of weeks ago to protect investors. She said “We expect Congress will take the steps necessary to avoid default, but in our position as money market managers we have to take precautionary measures”. Fidelity manages over $400bn of money market funds.

As I noted in last week’s column, the credit default swap market is showing significant signs of strain, with volumes up around one hundredfold (according to the FT) and the cost to insure US debt – the CDS price – also up massively, around tenfold. The chart below shoes the increase in CDS price to Thursday’s close. The price fell a little on Friday as a debt ceiling deal started to be priced in although it was still an elevated 56 mid-price mid-morning. 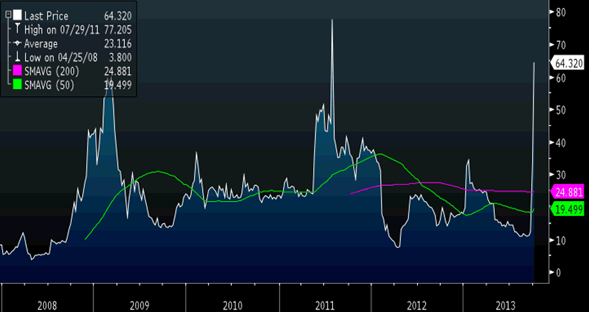 Whether this is a speculative move or real investors hedging their fears of a US default is difficult to tell from outside, but it’s probably a mixture of both

The default threat is also largely being felt is in the massive repo markets, where US debt is used as collateral for loans. The repo market for US Treasuries is worth around $5tn and according to Eric Green at TD Securities, quoted in the FT, “..some transactions (are) even steering clear of using Treasury’s as collateral”. That is extraordinary. And even if US debt is accepted as collateral the interest rate charged for such a loan has risen (because of the perceived increase in collateral risk). Kenneth Bentsen, president of the Securities Industry and Financial Markets Association, warned about these markets particularly this week before a Senate panel. And Fed Governor Daniel Tarullo said in a speech Thursday that the repo market is “in many ways the lubricant of the modern financial system. But, like many lubricants, they can be accelerants when things get hot.”

On the other hand, the forex market seems much more complacent about default risk. The worst performing currency on Thursday was the yen as it sold off from being the safe play (it had been the best preforming currency since the shutdown began on October 1). However the dollar, despite its safe haven status as the world’s reserve currency, will not be helped by either Yellen’s arrival or continued QE. And yet the yen, the other safe haven choice, hardly has great fundamentals either. During the 2011 debt ceiling negotiations the dollar on a trade weighted index basis was pretty directionless, although the greenback did manage a relief rally.

Any debt ceiling deal will be a temporary fix. A long term solution is likely after the mid-term elections in 2014. These are expected to be fought on Obamacare, and the election result will be either be approval, or not, from the electorate. That will determine the strength of either side’s negotiating position. And it’s not just me, Democrat and Senate Majority Leader Harry Reid is supporting a new Democrat effort to increase the debt ceiling enough to last until December 2014, after the November mid-terms.

Mario Draghi is in the US today for the central bankers and top financial officials annual get together at the IMF and World Bank. After all the criticism poured on Europe from the US for can kicking down the road, I wonder if Mario Draghi will indulge in a little schadenfreude?