The mother-of-all oil market busts is here: Talk of a 28% drop at the open 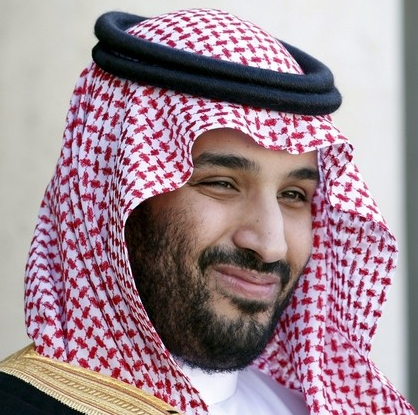 The mother of all busts is unfolding in the oil market. WTI crude is already down 37% since the January high and it's about to get much worse. Monday's open will be ugly, with talk of a 28% drop at the open. There are daily limits so there's a good chance it just won't open but we will get an idea in ETFs, oil stocks and foreign markets.

Saudi Arabia announced drastic crude price cuts on the weekend in a declaration of a price war after the OPEC+ cartel fell apart on Russia's refusal to lower production. Saudi official selling prices fell $8-$10.25 below Brent, which is the most in at least 20 years. They also hinted at hiking production by more than 2 million barrels per day.
The Kingdom at the same time appears to be fighting off a coup. Crown Prince Mohammed bin Salman arrested three royal family members on the weekend, including a brother of king. Rumors have resurfaced once again that the king is dead or gravely ill. Saudi Arabia also imposed a quarantine on al-Qatif city to halt the spread of coronavirus.
Even without a price war, the virus is a massive demand shock that could leave upwards of 5 million barrels per day unburned. Even if prices at the pump crater, don't expect a demand response if the virus continues to spread.
Add it all up and it's the perfect storm in oil. On top of that, US shale is already in the midst of a bust with $200 billion in debt maturing over the next four years. Russia and Saudi Arabia would love to see a sharp contraction in shale production, which has now almost-certainly peaked.
Looking at the oil chart, it has the potential to be extremely ugly. 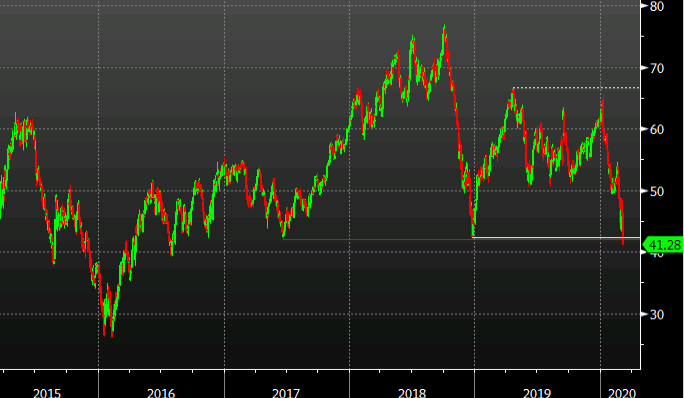 The first level to watch is $40 but that will surely break at the open on Monday and the crude could be a falling knife. The 2016 low was $26.05 but the measured target of the double-top at $65 is right around $20.
The selling won't end until the virus improves or we see massive production shut-ins from oil companies. Expect it to start with a wave of dividend cuts.
Saudi Arabia has rarely participated in a price war but one of the times it did was in 1998 and that sent crude as low as $9.85/barrel.
So the oil bust is here and now the question is what will be the collateral damage? The high-yield market is going to have a very bad day and who knows where the other vulnerabilities are.