A paradigm shift is under way on deficits

What happens in a world where government spending doesn't matter? 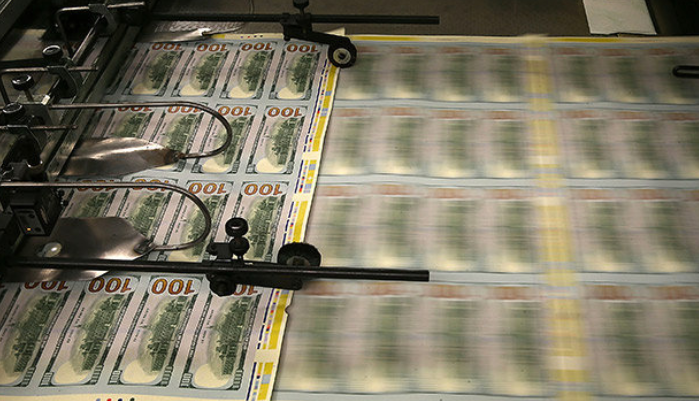 If you can print your own money, you can issue unlimited. The only risks are inflation and a decline in the currency.

It just so happens that inflation and a decline in the currency are exactly what many governments want.

In the developed world, inflation is non-existent and the currency war rages. The trump card in that game is default via monetization and it's coming.

The dominant ethos of the past 25 years has been a drive towards fiscal discipline. Politicians and political commentators have built their reputations and careers as misers. There is something inherently, almost pathologically wrong about defaulting.

That will all change.

It's not as crazy as it seems

No one is going to lose any money.

The idea of default sounds like it would create panic; if not in the streets then in markets. But it's easier than you might assume and it will happen sooner than you think.

The hard part is already done.

It's simply a matter of taking the debt the central bank already owns and writing it off. To ease the shock value of it, the debt will simply be converted into bonds the central bank will continue to 'own' but will have 0% coupons and no maturity.

Japan will be the first to do it

Japan is a demographic nightmare and has been unable to stir inflation for the past 20 years despite zeroed out rates. The debt-to-GDP ratio is a mind-blowing 227.9% with a fresh stimulus budget coming. There is no way out.

With the stroke of a pen, all that could disappear.

I don't even think it would be disruptive. The central bank could launch a new round of QE at the same time as the announcement and keep control of what's left of the bond market. At the moment, Japanese 10-year are yielding -0.11%. The means you have to pay interest to the government just so they'll give you your money back in 10 years. Almost everyone who owns Japanese bonds is an insurance company or pension fund that has no other choice.

How do markets react

Part of the market reaction comes down to communication. The government and central bank need to do everything possible so it doesn't sound like a default.

At the same time, the talk from economists and market watchers is shifting and will prepare everyone for the announcement.

Governments face hard choices but they will find that monetization is far easier than Eurozone-style austerity (how many governments won re-election after that?) or stalled out growth.

Certainly in the first episode there will be some worries in markets. Gold will undoubtedly rally and the currency will decline. It may even create some inflation.

But like QE, the first forays will be small and governments will quickly fall in love with the ability to spend in ever-larger amounts.

Picture a world where government spending among rich, developed countries doesn't matter. I'm not talking about ridiculous sums but deficits running at 3-4% of GDP with central banks buying up debt to keep interest rates pinned down.

That kind of world will put the levers of growth back in government's hands and finish the era of austerity.

It will eventually create a whole new set of problems (which I'll get into later) but it will solve the ones the developed world is facing now.

Here is Ray Dalio talking more about it.