Is the market too complacent ahead of the election?

Are investors underpricing the risks associated with the election outcome?

The polls over the past few weeks have certainly given off the impression that a 'blue wave' is increasingly likely, and that has arguably created some sense of complacency in the market that there will be something positive to look forward to past 3 November.
All the talk in the build up to the election is about stimulus and I would argue that investors will be focusing on that first and foremost when digesting the election result. 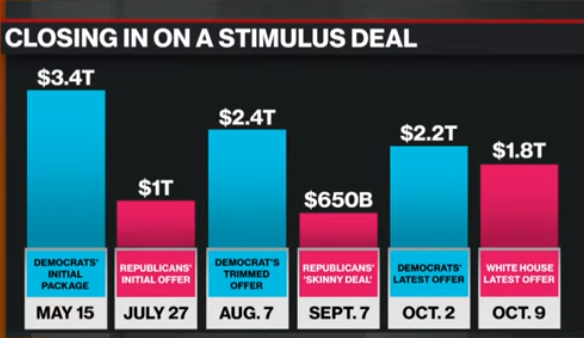 For bank trade ideas, check out eFX Plus
A 'blue wave' sounds appealing for risk assets to cheer on the result as it means that added stimulus should arrive soon - one way or another - without much of a hiccup.
However, Biden's tax policies will be questionable in the long run and that may come back to hurt corporate earnings down the road. Then again, with the Fed still providing much support to the economy, does valuation/earnings really matter at this point?
Looking beyond that, there is a good argument that the market isn't quite prepared to digest any other outcome. A scenario where Biden wins but Republicans keep hold of the Senate would mean gridlock in Washington and that bodes ill for stimulus hopes.
Sure, it also means that Biden's tax policies are likely to be stalled as well. However, the absence of fiscal aid for the US economy at a time when the virus situation is worsening exemplifies the sort of risks that the market is perhaps underpricing.
Over to FX, you can barely tell that there has been much election pricing - if any at all.
I would have argued that the dollar should see some inflows on risks of a possibly more contested outcome, or in the event that Trump doesn't concede immediately.
However, that has hardly been noticeable or perhaps the market is saying that they are comfortable enough in looking past that temporary uncertainty (if it happens).
The past few weeks have largely been driven by stimulus pricing instead and though that has now become synonymous to the election result, I don't think that trade includes the potential risks and volatility that may occur on election day come 3 November.
The market may be complacent to election risks in my view, but there's a likelihood that investors could get away with that at the end of the day.