Argentina is a perpetual basket-case. Like clockwork, the country has fallen into economic crisis every 10 years in its history.

The last crisis was the largest sovereign default in history. It was in late 2001, so the next crisis is already overdue.

In the past few months, it has been one negative sign after another. The government nationalized a Spanish oil company and the IMF has warned them about getting a ‘red card’ for manipulating inflation statistics.

Today there is a run on the government bond market (what’s left of it) after a province said on the weekend it would pay some of its USD denominated debt in pesos. A departing ambassador is also comparing it to apartheid South Africa in today’s FT. 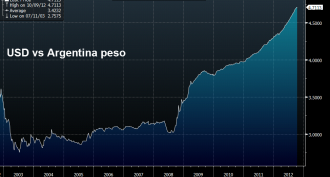 The government has brought in capital controls to stem the flight out of pesos into dollars but it will fail. The chart looks like it could go parabolic and one-year forward rates are at almost 6 (I wouldn’t be surprised to see USD/ARS at 15).

The global economy took the 2001 default in stride but the world has grown exponentially more interconnected. At the moment, it’s teetering and you never know what could bump it over the edge.