Brazilian miner Vale is lobbying Beijing to allow the mining company’s supersize ships, known as Valemaxes and weighing in at about 400,000 deadweight tons, access to Chinese ports. Vale wants to ship iron ore in the huge vessels to reduce the disadvantage from the company’s longer distance from the Chinese market, compared with  Australian rivals BHP Billiton and Rio Tinto.

More at: Vale Awaits Chinese Shipping Decision (The Wall Street Journal is often gated, so if you’re unable to access the article try a search of Google news using the headline) 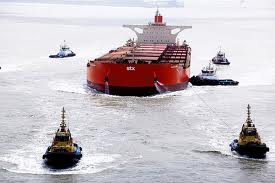