The Canadian dollar is riding high today and one of the big reasons is that Trudeau's government has spent more than nearly every other nation to support the economy during the pandemic.
Today, that trend will continue as new finance minister Freeland is set to deliver the fall fiscal update. An update in July pegged the deficit at $343B but Scotia now says it could reach as high as $425B -- around 20% of GDP.
The update itself is unlikely to spark much reaction in markets because the government has already announced or hinted at the larger programs that are coming. The bond market may move based on longer-term spending and deficit plans that are outlined.
In September the PBO forecasted deficits of $74B and $55B in FY22 and FY23, respectively, in September based on policy commitments at the time. However Scotia sees them ballooning to $140B and $85B. 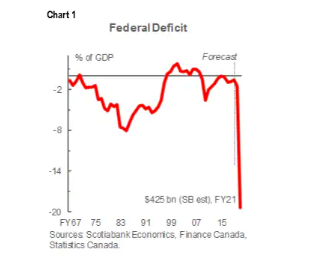 The good news is that a generation of fiscal prudence put Canada in a very good spot ahead of the pandemic and debt should stabilize below 60% of GDP in a few years. Even with the insane spending this year, Canada will still have the lowest net debt level in the G7.
A risk though in the next few days is that S&P downgrades Canada. However there was little reaction in the loonie from the Fitch downgrade earlier this year.