The Canadian government kneecapping its own housing market is unprecedented

One of the craziest forecasts you will ever see 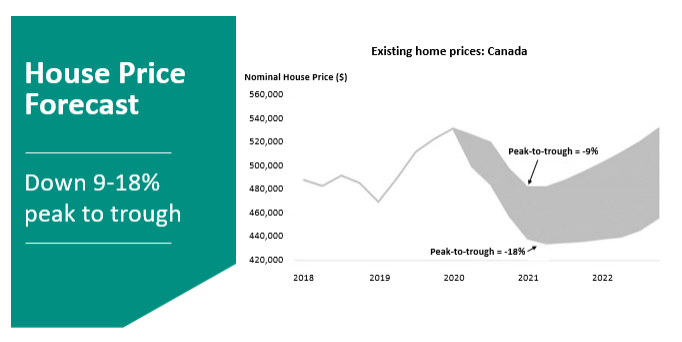 An extraordinary thing happened in Canada earlier this week. It largely went unnoticed initially but now people are noticing.
In a speech in Ottawa on Tuesday, Canada's government-backed mortgage insurance company -- the CMHC -- forecast a dramatic national house price decline.
"Looking at debt multiples of disposable income, that measure will climb from 176 per cent in late 2019 to well over 200 per cent through 2021. Moreover, CMHC is now forecasting a decline in average house prices of 9 - 18 per cent in the coming 12 months. The resulting combination of higher mortgage debt, declining house prices and increased unemployment is cause for concern for Canada's longer-term financial stability," President and CEO Evan Siddall said.
The Canada Mortgage and Housing Corporation is a crown corporation. It technically operates at arms length from the government, like Fannie and Freddie in the US, but to Canadians, it might as well be Trudeau himself telling them that house prices are about to tumble.
What's insane about this is that it could very well become a self-fulfilling prophesy. This isn't a bank or economist making the call, it's the government. Even then, it's a particularly dire forecast with bank economists in the -5-10% range.
For a city like Toronto or Vancouver, where the median house price is well-above $1m, a potentially 18% drop would wipe out buyers.
I'm guessing this is some kind of attempt at transparency and independence but it's madness. House prices are a confidence game and few would argue that parts of Canada have wildly overvalued housing but for a government to pop its own bubble is unprecedented.
Economists (and semi-permabear) David Rosenberg spells out what such a fall would mean for the loonie, which continues to defy gravity.