Far too many initial coin offerings are scams

The only real question here is whether people should be protected from their own foolishness.

Here is the PBOC's statement on Initial Coin Offerings:

I'd say they nailed it.

An ICO is one of the greatest pump-and-dump schemes of all time. I mean, with a classic stock market scam you have to go through a lot of bureaucracy. You have to draft up some somewhat-legit looking paperwork saying you found gold in Africa, or something to do with medicinal marijuana.

You can't just say, "I found gold, send me some money." People are going to want to see something convincing.

You have to get on an exchange too, which is a major affair. Then there is all the work of pumping up the shares before you dump them, and the very real possibility that the SEC will track you down.

Don't get me wrong, people still do it but I'm not sure why when you could just launch an ICO and basically say "I'm doing an ICO, here's the address to send money."

You just invent a token with no underlying assets that also conveys no ownership interest and sell it to suckers. Traditionally the reason this didn't work is that people didn't buy that kind of thing. If you wanted to get real money, you need to go through all the hassle of listing stocks on an exchange. Now the cryptocurrency boom will let you raise millions of dollars by selling non-ownership in a yet-to-be-executed idea.

"Unlike with every other token sale on the market, I can guarantee here and now that the value of UET will not (in fact, can not) reduce during or after the ICO. Since these tokens aren't worth anything to start with, there's nowhere to go but up!

But remember-this is a completely honest ICO, which means I don't want anyone to mistakenly expect the value of the tokens to go up, either. They're called Useless Ethereum Tokens for a reason."

That's a good chuckle but Dogecoin -- which was based on a meme -- has a market cap of more than $200 million. Others, like messaging app Status, have sketchy business plans but raised $44m in minutes via an ICO.

There are dozens more planned every day and almost none of them would make it to the angel investor stage in the real world. Yesterday Paris Hilton tweeted about an ICO. 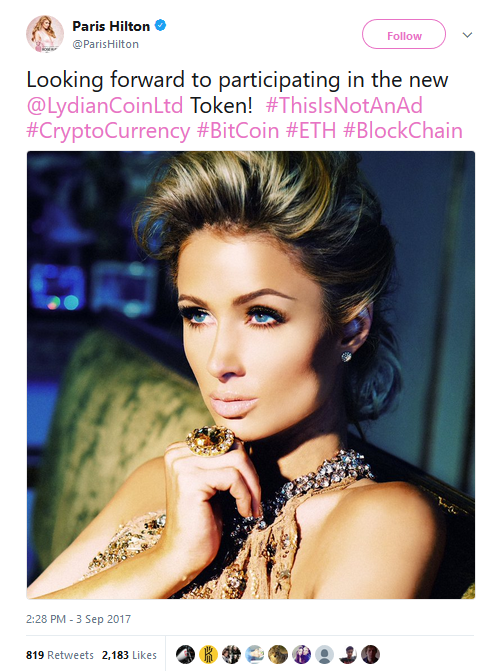 Even the worst governments don't like to see their citizens scammed (unless it's by the governments themselves), so China is cutting off people from buying tokens. Good for them.

Then again, I'm torn. If people are stupid enough to invest in some of the these schemes, they're going to lose it all anyway.

Here's a video where I predicted Bitcoin was going much higher (and that regulators were coming).