In late January, the financial markets reacted forcefully to the news of the Coronavirus. Most of the damage to markets occurred in the China stock indices, such as the Shanghai Composite, which slid by 13.32% from January 21 to February 4. However, Crude oil prices such as WTI also slid as traders and investors sold because of fear of an economic slowdown in China. In this article, we will try to explain what may happen with crude oil prices using the outcome of the 2003 SARS virus breakout.

The hurt to the Chinese economy, will not come from the number of people infected by the new virus, instead because of the about sixty million Chinese citizens that are under lockdown as the government tries to limit the virus spread. As people can't go to work, they can't spend money or produce, and extensions to the Chinese New Year holiday has occurred a few times already to avoid people congregating. Most recently, media reports say that Chinese children will not be back at school until March 1.

The effect of the coronavirus has had a strong impact on crude oil prices as China is the world's biggest oil and natural gas importer. They consume about 25% of the total world crude oil consumption, according to Jude Clemente, in a Forbes article.

As Chinese economic growth has halted on people not being able to work the demand for crude oil and other energy prices have declined, causing energy prices to slide. From January 22, when news about the coronavirus started to spread, and more information about the number of confirmed cases was shared WTI prices slid by 14.26%, to reach a low of $49.3 at the start of February.

The price declined as investors prepared themselves for lower demand, and on February 7 a Financial Times report said Chinese importers are threatening to cancel up 70% of February seaborne imports of liquefied natural gas as the energy demand had collapsed, and as the Chinese ports struggle as staff are not back to work. The move caused liquefied natural gas prices to slide to their lowest levels ever. Also, on February 12, OPEC, in their monthly outlook said that oil consumption would increase by 990,000 barrels a day in 2020, this figure is lower by 200,000 b/d than OPEC had previously estimated.

However, despite the negative news, crude oil prices have stabilized.

Crude oil breached the June 5 low on February 3, which was the same day the Shanghai Composite opened lower by 8.5% after being closed for the Chinese New Year on January 23.

The break to the June 5 low, triggered a large rectangle pattern that had been forming since May 2019 and is made up by the June low of $50.54, and the May high of $63.79. As we can see in the image below the price has several touchpoints and the break to the June low triggered a bearish rectangle pattern, which has a target of $37.29. However, much like the Shanghai Composite, crude oil prices did not add to their losses and it now looks more like the break to the June low was a false move. If the price decline below the June 5 low indeed was false then the price might be able to claw back 50% of its losses from the 2020 high of $65.75; this means that the crude oil price could reach the $57.50 level. 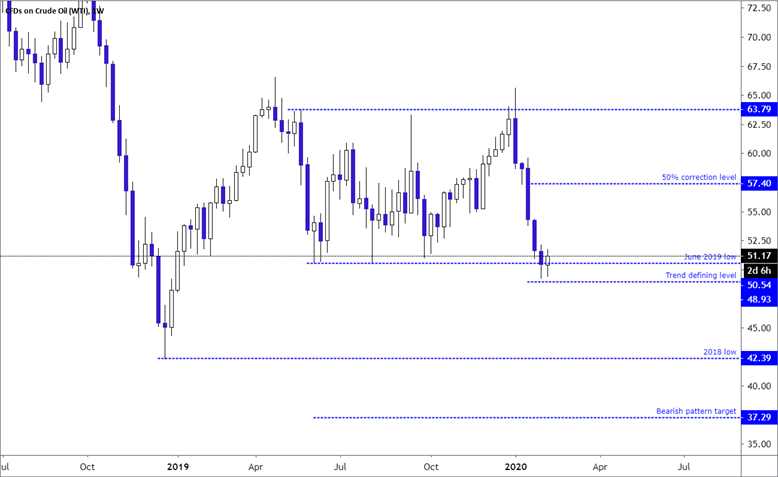 Why did crude oil prices bounce?

As in 2003 and the SARS epidemic, the Hong Kong stock index reached a low around the same time as the spread of the SARS growth was at its highest. With the 2020 Coronavirus crisis, the focus has been on the Shanghai composite as China is more affected than any other country, and it looks like the market bottomed out in early February when the growth rate of the Coronavirus spread reached its high.

The growth rate of the virus has slowed dramatically, and if history repeats itself, and the coronavirus crisis does note flare up again, then there is a chance that the bearish breakdown in WTI crude oil prices was false. If this indeed proves correct, then crude oil prices may have formed a low in February and the price could try to reach $57.50 in the next few months. However, if the price slides below the 49.93 level, which is a level just below the February low, then I will consider the breakout from the rectangle as valid and the price might be able to reach the pattern target of $39.29.