Decision Desk HQ has reported that Pres. Trump has won the state of North Carolina and it's 15 electoral votes.
So far there is no call for voter fraud by Pres. Trump, his staff or his lawyers.  ; ) The win was expected. 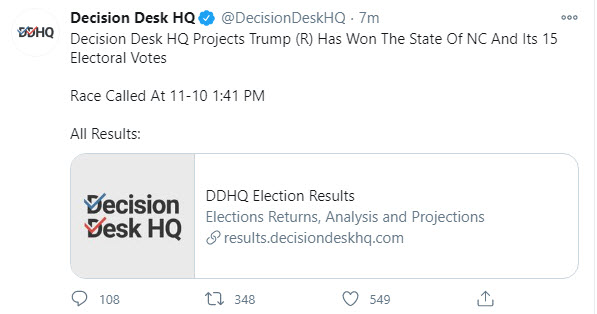 Meanwhile, Edison Research is reporting that Biden as widened is leading Georgia with Biden leading 49.5% vs. 49.2% with 99% of the vote tallied.
Yesterday Georgia GOP runoff candidates Kelly Loeffler and David Perdue called for fellow Republican Secretary of State Brad Raffensperger to resign ahead of their runoff election on January 5th.  They said:
The state of Georgia will have a recount.  Biden leads by some 12,000 votes.
Arizona remains still in play (although Fox News called the state in Biden's favor)
Joe Biden Democratic Party 49.5% 1,648,642
Donald Trump Republican Party 49% 1,633,896
In the vote dump last night Biden saw his lead narrow from 14,886 votes to 14,746.  The state estimates Arizona's counties have about 61,500 ballots left to verify and count, and many of those are provisional ballots that may or may not ultimately be verified.
My vote has been signature verified and counted.

Meanwhile for the Arizona Senate seat, Martha McSally trails Dem challenger Mark Kelly by 80,000 votes with up to 61,500 ballots left to count, but has not formally conceded.  Of course, it is not a law to concede an election.
However, when McSally lost the 2018 Senate race to Krysten Sinema, she did send a tweet and announced her concession at that time.
McSally was later was named as Senator to replace Sen John McCain after his death.
As the late Alex Trebek might have said it:
"This US Senator lost 2 Senate elections in a two year span, yet served as a US Senator between the elections.
Who is Marth McSally?
For bank trade ideas, check out eFX Plus