EU on a collision course with Greece

The euro is down slightly on the headline but in my opinion it should be down much more. I don't know the context of the article, it's just a headline on BBG at the moment, but if the EU doesn't agree to aid. It's pretty much game over for Greece.

Circle April 24 on your calendar. That's when EU ministers meet in Riga, Latvia to decide Greece's fate. Looks like Tsipras is going to have to go on a charm offensive to mend fences before then.

More details are out and it's not a Handelsblatt source but it cites an interview with EU Commission VP Dombrovskis who said ministers 'likely won't' sign off on Greek reforms later this month. That's significantly less definitive that the initial headline so it's not quiet as worrisome, although it still sets up a tense meeting.

He said ministers will "take stock of progress" at the upcoming meeting and that the earliest decision on unlocking funds would come May 11. The reason for the delay is that Greece doesn't want to implement (and in some cases it wants to reverse) labor market reforms.

That would put Greece in a funding crunch because they have some large bills coming due before then, especially a May 1 IMF repayment. Now, the IMF has a 30-day grace period so the deal could get done in the interim but Greece is really flying close to the sun here and I don't think Greek bank deposits will be headed in the right direction.

Here's the translated version of the Handelsblatt story. 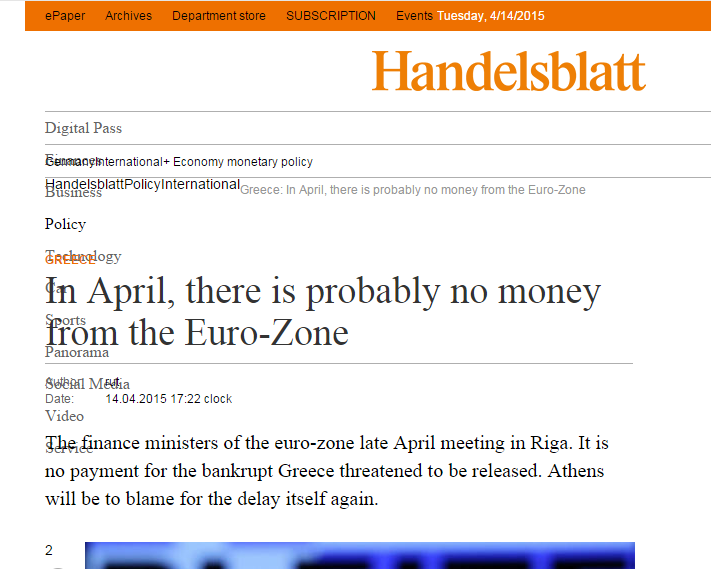