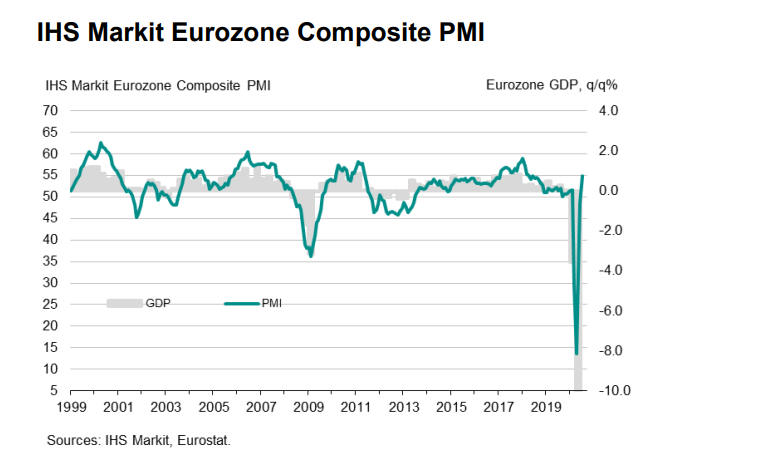 The preliminary release can be found here. That is more or less close to initial estimates as the final report reaffirms that the euro area economy observed a modest rebound in July, as domestic demand improves following the easing of virus restrictions.
That said, the outlook remains relatively uncertain still with labour market conditions a key area to focus on in the latter stages of Q3 and in Q4, with government stimulus measures to wear off. Not to mention, the potential for a secondary virus outbreak in the region.
Markit notes that:

"Eurozone service sector business activity rebounded in July to grow at a rate not exceeded for over two years. France and Germany enjoyed especially strong gains though renewed growth was also recorded in Spain and Italy as COVID-19 containment measures continued to be relaxed.

"Combined with a surge in manufacturing production, the renewed expansion of the service sector bodes well for the economy to rebound in the third quarter after the unprecedented slump seen in the second quarter.

"Whether the recovery can be sustained will be determined first and foremost by virus case numbers, and the recent signs of a resurgence pose a particular risk to many parts of the service sector, such as travel, tourism and hospitality. However, even without a significant increase in infections, social distancing measures will need to be in place until an effective treatment or vaccine is available, dampening the ability of many firms to operate at anything like pre-pandemic capacity, and representing a major constraint on longer-run economic recovery prospects."