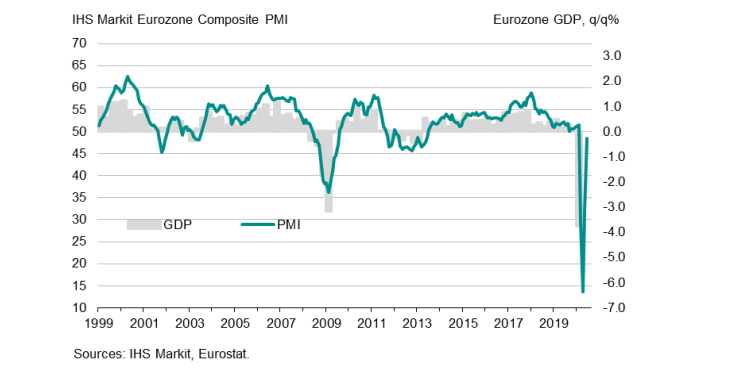 The preliminary report can be found here. The revision higher is predicated by the better French and German readings earlier as well, but the story remains very much the same.
The euro area economy shows a modest rebound from May to June, but overall conditions are still subdued - not least with demand (domestic and foreign) remaining weak.
On demand conditions, that may prove to be a drag in the coming quarter. Hence, that will be a key spot to watch in assessing the pace of the recovery in the coming months. In turn, that will be how the market will interpret optimism and economic sentiment in general.
For bank trade ideas, check out eFX Plus
Markit notes that:

"The headline eurozone PMI surged some 17 points in June, a rise beaten over the survey's 22-year history only by the 18-point gain seen in May. The upturn signals a remarkably swift turnaround in the eurozone economy's plight amid the COVID-19 pandemic. Having sunk to an unprecedented low in April amid widespread business closures to fight the virus outbreak, the PMI has risen to a level indicative of GDP contracting at a quarterly rate of just 0.2%, suggestive of strong monthly GDP gains in both May and June.

"An improvement in business sentiment meanwhile adds to hopes that GDP growth will resume in the third quarter.

"However, despite the vigour of the return to work following COVID-19 business closures, we remain cautious as to the strength of any longer-term recovery after the immediate rebound. Companies continued to report weak underlying demand in June. Many remained risk averse, being reticent to commit to spending and hiring due to persistent uncertainty as to the economic outlook, and in particular the likely sustained weakness of demand for many goods and services due to the need to retain many social distancing measures. While confidence in the future has improved, it remains well below levels seen at the start of the year, reflecting how many businesses are far from back to normal."