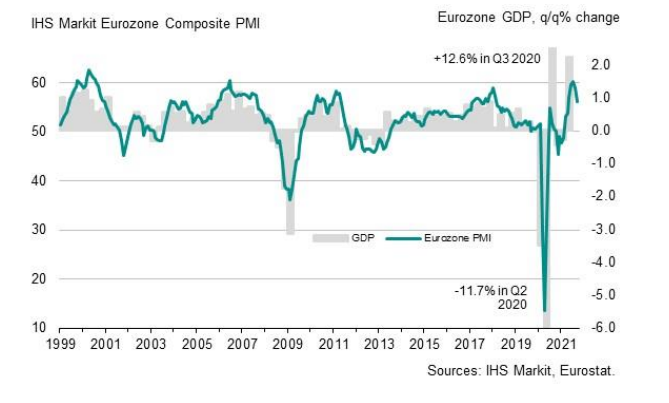 The downside misses were already telegraphed by the German report earlier but this reaffirms a loss in growth momentum in the euro area as supply bottlenecks arguably a key concern weighing on overall sentiment in the region. Markit notes that:
Invest in yourself. See our forex education hub.

"On one hand, some cooling of growth from the two-decade highs seen earlier in the summer was to be expected. On the other hand, firms have become increasingly frustrated by supply delays, shortages and ever-higher prices for inputs. Businesses, most notably in manufacturing but also now in the service sector, are being constrained as a result, often losing sales and customers.

"Concerns over high prices, stressed supply chains and the resilience of demand in the ongoing pandemic environment has consequently eroded business confidence, with expectations for the year ahead now down to the lowest since January.

"For now, the overall rate of expansion remains solid, despite slowing, but growth looks likely to weaken further in coming months if the price and supply headwinds show no signs of abating, especially if accompanied by any rise in virus cases as we head into the autumn."