A few hours after markets closed on Friday for the week in the US, President Trump tweeted that he had an agreement with Mexico and his further tariffs would be delayed indefinitely. This set the scene for a mover higher for MXN and lower for yen in very early trade as Monday got underway here. 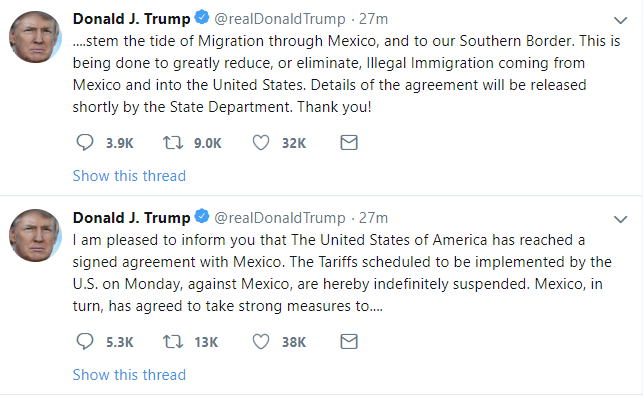 There were various other weekend news items, notably, Mnuchin accused China of yuan manipulation (by not intervening to support the currency), in the UK Boris Johnson added a tax-cut promise into his campaign to become PM, and some moves in the US to water down the Huawei ban.

As the session progressed we got FX (and gold) reserves from China for May (both higher) and also trade balance data showing a surprising growth in exports. Of extra interest in the trade figures (for May), imports from the US fell 25%.

EUR and GBP both lost a little on the session here. As did CAD, AUD and NZD (all against a USD base). Gold was a poor performer, down more than 10usd on the day (compared to late US trade Friday).

Bitcoin lost ground over the weekend.