After the break down of negotiations between the US and China on trade late last week US President Trump was on twitter again over the weekend not backing down. On Saturday evening (US time) he tweeted the terms offered to China would be 'far worse' in his second term. He backed this up with a Sunday evening tweet saying he had China right where he wanted them, and further warning China to not wait it out until 2020 later (see bullets above).

The very early moves here in Asia reflected the Saturday tweets, yen moving stronger and risk currencies (AUD for example) trading down. The tweets that followed came when there was a little more liquidity in markets and the moves extended. To keep it all in perspective, though, apart from the yuan, forex ranges were not large. USD/CNH jumped to its highest since January this year.

Equities took more of a hit, overnight Globex trade (ES eminis) were more than 1% down as the opened for the new week. Regional equities also fell.

USD/JPY opened lower from its circa 110.95 level late Friday and fell to 110.60 before coming back to around 109.80. Its just under there as I post. AUD/USD, too, opened lower. It managed a retrace move to around 0.7 before dropping down to lows around 0.6975. Its barely off the canvas as I post. NZD/USD has traded a similar pattern.

EUR/USD is net little changed while cable has recovered all its early dip to be above 1.3010. USD/CAD is up also.

Gold looked promising in early trade, hitting above 1288USD but has since fallen under 1284.

Apart from the trade war developments, we had a few Brexit snippets and data that only had a minor impact. 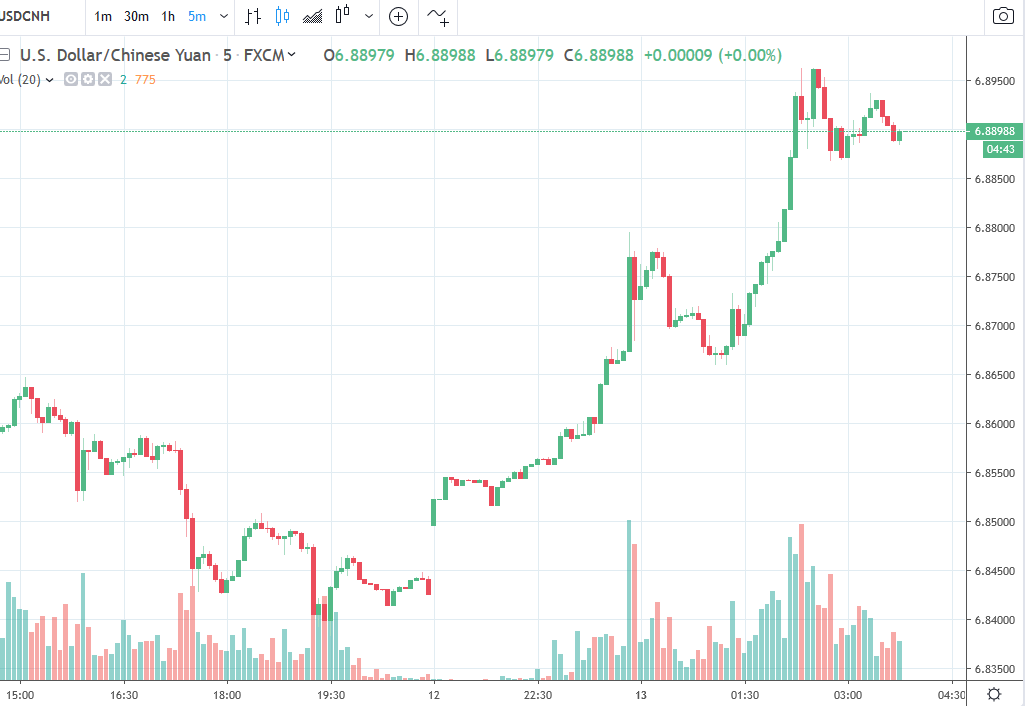