So, yeah, this is significant. The move in oil prices was huge, the biggest jump ever. In terms of price level though, the highs seen were last seen in late July, which outs the move into perspective. What to watch going forward is how quickly facilities can be repaired and brought back online. For events as they unfolded: 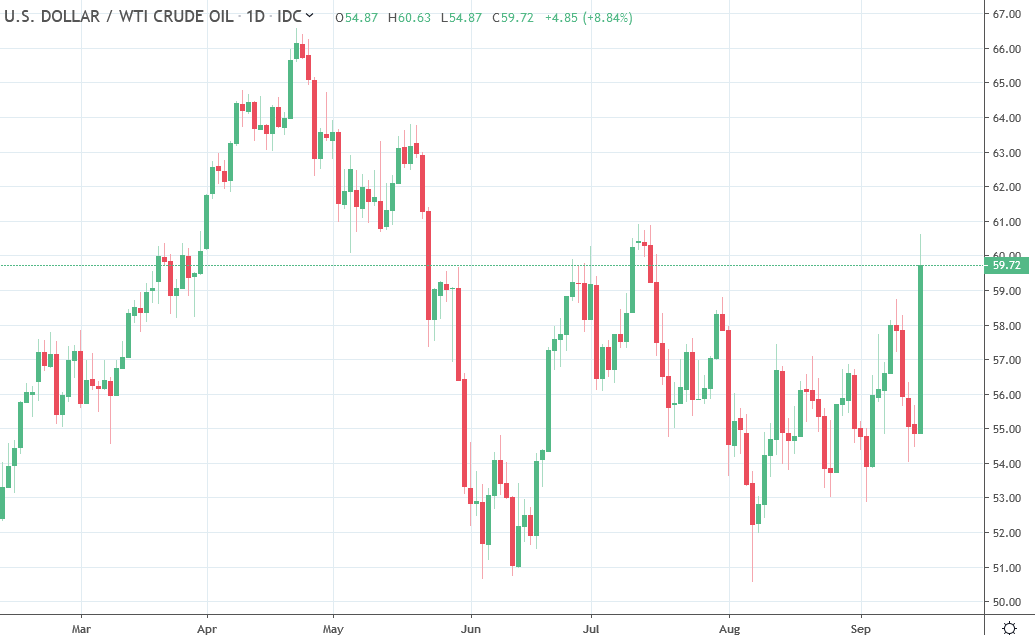 As you'd expect NOK and CAD both saw gains, both countries are net oil exporters. Yen and CHF gained on the reading that the attacks are a ratcheting higher of geopolitical tension. Indeed, US President Trump has promised the US is 'locked and loaded' to proceed with a response. Iran is the suspect, although at this stage Trump has not tweeted beyond 'there is reason to believe we know the culprit'.

USD/JPY gapped lower in opening trade and retraced some of the gap before dropping back toward early lows. USD/CHF, too, moved lower on the session with a weaker attempt at a retrace.

Cable and euro were not where a lot of the action was but both have had moves during the session here. Cable is a touch weaker net for the session.

AUD/USD and NZD/USD were both softer early. AUD managed a complete retrace before losing some of it again to be net lower for the day. Kiwi though has outperformed to be net higher. Australia looks like it might become further entangled in a dispute with China re a cyber attack (see bullets below).

Gold surged, it managed above USD 1,510 at one stage before coming up a few dollars.

On the data front, the items of significance were from China, with missed results for August data across investment, retail sales and industrial production.

Japanese markets were closed for a holiday today.