Late NY time saw oil inventory survey data published (the private report ahead of official government data Wednesday morning US time). A drawdown was expected and got a build instead. Oil prices lost ground on the data and have tracked sideways to slightly up since.

Soon after we got confirmation that US Congress House Leader Pelosi was launching an inquiry into impeaching President Trump. This had been the talk for the previous 18 hours or so which blunted market impact on the announcement.

Somewhat bizarrely (sarcasm alert) we had a report out on China (from China Beige Book) saying the economy is slowing at its worst in Q3. Fancy economics moving markets, I thought it was only politics! AUD lost a few points.

Soon enough it was on to the focal scheduled event, the Reserve Bank of New Zealand policy announcement. The Bank left the cash rate on hold as was pretty much unanimously expected and issued an accompanying statement that was not as dovish as the market was expecting. It was not hawkish but the response seemed to turn on the phrase they'd do more 'if necessary'. NZD/USD popped up to a fresh session high, towards 0.6350 and has since dropped back to circa 0.6330 where it is as I update. As I post BNZ have revised their calls for the RBNZ to a cut In Nov and then again in Feb (adding the February call to the their November call). 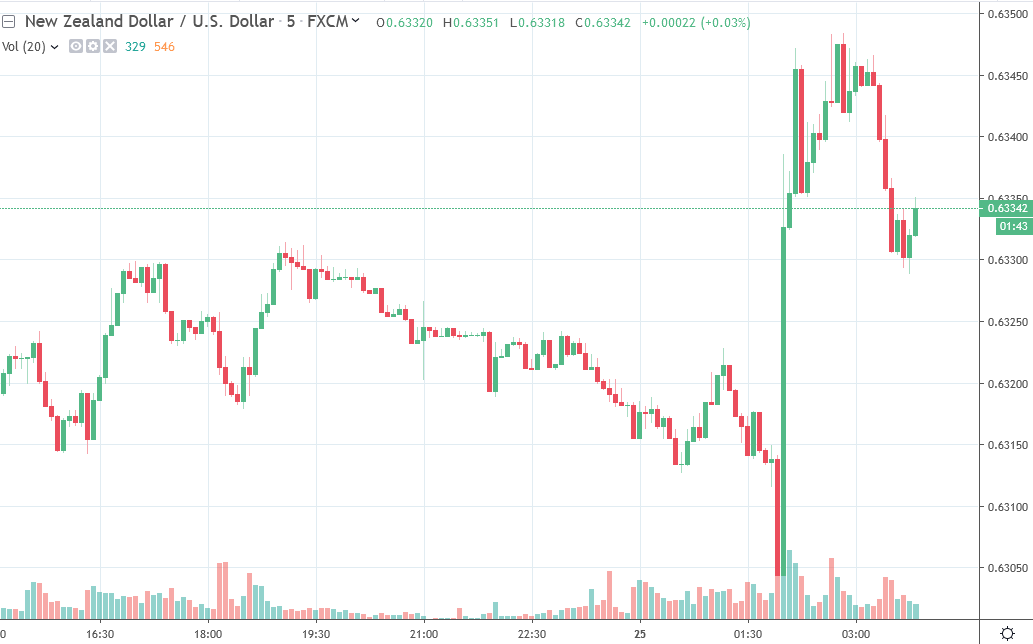 News came after this China was considering buying pork from the US. If you've been tracking events in China you'll know that pork supplies have been curtailed due to swine disease. There was some reading that the potential purchase indicates an easing in tensions with the US but I reckon that is over reading the move. It might be a convenient bone to throw at the US though.

AUD/USD popped to highs just above 0.6800 on this news and has since turned right back down to its session lows around 0.6785. Yeah, small range.

EUR, GBP, CHF, CAD and yen are all a few points lower against the USD on the session. USD/JPY has had a near 40 point range for the day and is currently near the top end. If there was 'risk off' it is not reflected in the yen today. A BOJ board member flagged the potential for further easing ahead, not unusually.