Early Monday news pre-Tokyo trade was that China wants to place certain US demands off-limits in the trade talks recommencing this week. Such as industrial policy reform and government subsidies. These are two key US complaints. It remains to be seen how the US will respond.

The forex move was as expected, with a sell-off for the key AUD/JPY 'risk barometer'. The move lower was fairly small though, perhaps indicative of the already existing lack of market conviction on anything meaningful coming out of these talks. 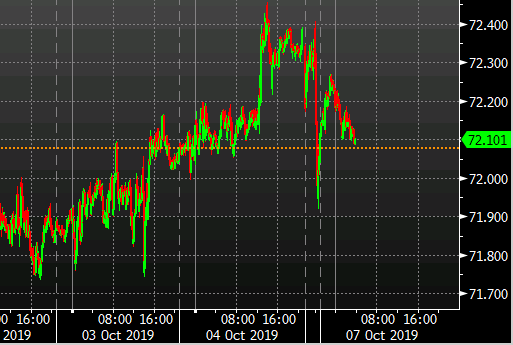 US equity index futures opened lower a little while later (on the Globex reopen) reflecting the news.

As usual, there was a barrage of Brexit-related news over the weekend. The PM insisting October 31 is the exit date deal or no deal and seeking ways to subvert parliament's requirement he requests an extension.

Further on the political front, check these out:

Currency movement was not large. A minor wiggle for EUR/USD but its not a lot net changed from late Friday. Cable is down just a few tics. USD/JPY ditto.

AUD/USD is net down 10+ points on the session while USD/CHF is up a similar amount, USD/CAD also.

Oil is opening the weak a touch softer in price while gold is little changed. Over the weekend BTC lost a few hundred USD and continued that today here.