GBP was a mover in the very early hours of Monday morning in Asia, summary of posts here (read from the bottom up for the chronological order):

GBP traded to lows circa 1.3230 in sketchy, thin liquidity conditions in response to plenty of news reports over the weekend of further obstacles in Brexit trade talks between the EU and the UK. Cable traded back up to just over 1.3260 and has spent the balance of the session dribbling back down a little. As I post its not back to as low as early trade. 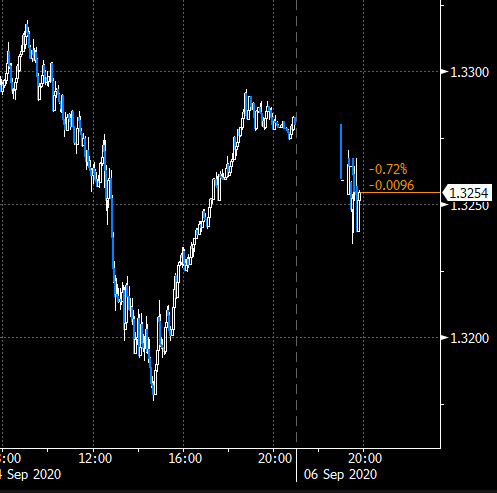 EUR/USD has edged lower over the course of the session so far here, but in little more than a 10 point range. AUD and NZD have been similarly range bound and just somewhat on the heavy side.

USD/JPY and USD/CHF also small ranges, CHF a tad weaker than the yen.

USD/CAD is higher with oil prices slipping in Asia - Saudi Aramco has lowered prices on some product to the region, and also to the US (see bullets below).

News and data flow was non-impactful otherwise. Asia took advantage of the Monday US holiday coming up to mainly sit on their hands.

A note on Hong Kong, there were almost 300 arrests on Sunday as protesters took to the streets to oppose the postponement of legislative elections and the new national security law.