ForexLive Asia FX news wrap: This is what happens when you fire the head of a central bank

Regional equity markets had a poor showing here in Asia as you'd expect given Friday's US moves in response to the beat on the NFP. ICYMI, the NFP came in well above expectations putting a final nail in the coffin of those expecting a 50bp rate cut from the FOMC at the end of this month.

Along with the falls in stocks on Friday the USD surged and yet while local equities slipped here today the FX space was restrained (with one notable exception).

USD/JPY traded early below 108.50 but soon began to make some gains pre-Tokyo trade. 108.60 proved a step too far though and it has come back towards 108.40 as the session progressed. Yen crosses gained early with the move and have also since pulled back.

EUR, GBP, AUD and NZD have all done little against the USD, NZD/USD the best out of that sleepy lot. Oh, USD/CAD is little changed also. USD/CHF, meanwhile has come off just a few points.

The exception in forex today was the Turkish lira. Over the weekend the Turkish President fired the head of the central bank. No official reason was cited although its widely accepted its because the Governor did not cut interest rates. Dunno why Trump is not a bigger fan of Erdogan ;-).

USD/TRY traded early here (in what little trade there was) above 5.8 before dropping back. Its around 5.7590 as I update (its changing in a blink though), after multi-big figure moves. 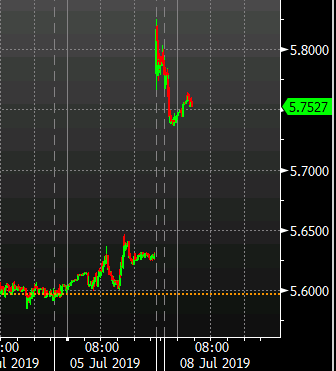