USD/JPY initially traded higher in the Asia morning, moving towards 108.90 but failing to carry on higher from there. Its subsequently come back under 108.80. There was little news nor data to account for the move (we did get Japanese wage figures for May, showing the fifth consecutive year-on-year decline).

Moves elsewhere were limited also, and also with little news nor data impact. Australia was a bit of an exception. We had the June iteration of the National Australia Bank Business Survey which showed a drop from business confidence (to 2 from a prior 7) and a rise for business conditions (to 3 from the previous 1). Both well, well down from highs and barely holding long-run averages. The employment sub-index was of particular interest, given the RBA focus on labour market developments. It rose to 5 (from May's 2, and April's -2), an encouraging sign.

Chart via Goldman Sachs' response piece to the data, illustrating the fall for the measures in past months: 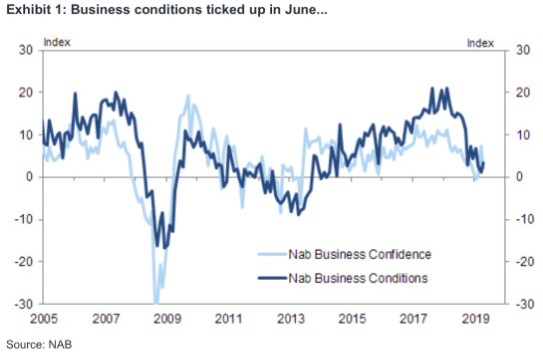 NZD/USD had a small range and is net little changed for the day.  Something to note is the NZ Deputy PM giving the government credit for the lower NZD (see bullets above). This should create an interesting response if it comes to the attention of the Tweeter in Chief in the US - Trump will not be impressed by a foreign government achievements lowering a currency against the USD.

EUR, GBP, CHF, CAD are all not a lot changed against the USD on the session. Gold also. BTC/USD gained.