The chairman the Federal Reserve Jerome Powell, and the current Treasury Secretary Stephen Mnuchin were invited to Capitol Hill to discuss the economic outlook in front of the Senate Banking Committee.  While Powell painted a more guarded picture based on uncertainty from the Covid, Mnuchin painted a more positive outlook for the economic recovery.

The pair also debated with the help of partisan Senate members, the announcement in November that Mnuchin would end several Fed emergency loan programs. Mnuchin argue that the ending was as per the law. While some Democratic Senators speculated that the Treasury Secretary was trying to sabotage the economy going into the Biden administration.

There is also some chatter about the Dems and Mnuchin getting together to discuss increased Covid stimulation. There was a bipartisan rescue package of $900 billion, that Sen. Mark Warner (D) called "the best effort" to reach a framework for a stimulus deal that both the Democrats and Republicans could agree.

That chatter gave stocks a boost on the 1st day of the last month of the year.  Both the S&P index and the NASDAQ index close at new record highs. The NASDAQ index led the way with a 1.28% gain. The Dow industrial average length but still rose by 185 points or 0.63%.  However, the Dow industrial average could not stay above the 30,000 level. It peeked at 30,083.31 but is closing at 29,823.92.  European shares also advanced smartly with the UK FTSE 100 leading the charge with a gain of around 1.9%.

In the forex, the EURUSD trended to the upside and that propelled the EUR to being the strongest of the majors. The JPY and the USD were the weakest. 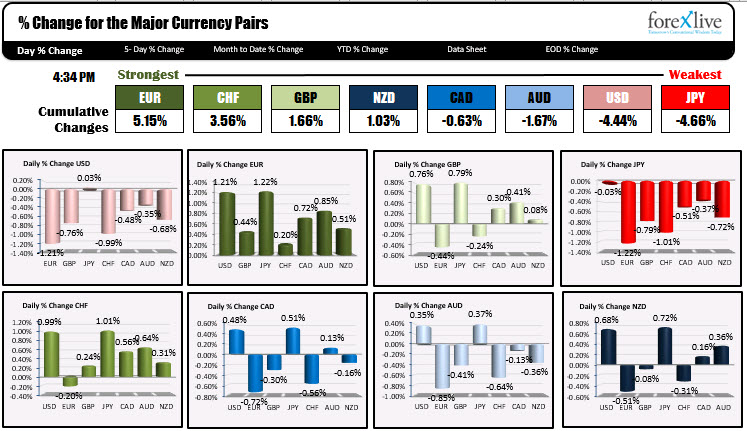 There was some speculation that the EU-UK Brexit talks has entered the mythical tunnel Tom Newton Dunn of the Times Radio reporting:

UK-EU trade deal talks have, at long last, entered the mythical tunnel. Michel Barnier has stopped internal debriefs to the wider EU, his last was on Friday. Hopes (on both sides) of a deal by the end of this week - but could still yet all fall apart.

The news also helped the GBPUSD rebound and reverse London morning session declines (after an Asian session rise).   The GBPUSD is closing the session at the highest level since September 1 (at 1.34816 - which is the high for the year too). The pair is trading at 1.3422 near the end of day close.

The USDCHF was another big mover. It fell nearly 1% lower and is dipping below the 0.9000 level for the first time since November 18th when the low for 2020 was reached at 0.8978.  A break below that level will take the USDCHF to the lowest level going back to January 2015.

In other economic news, the ISM manufacturing index tip to 57.5 from 58.0 expectations and 59.3 last month. Particularly or some was the move in the employment index to 48.4 from 53.2. A reading below 50 indicates contraction in the labor market.  The US jobs report will be released on Friday at 8:30 AM ET.

Construction spending came in better than expectations at 1.3% vs. 0.8%. However, the prior month was revised sharply lower to -0.5% from +0.3% originally reported.